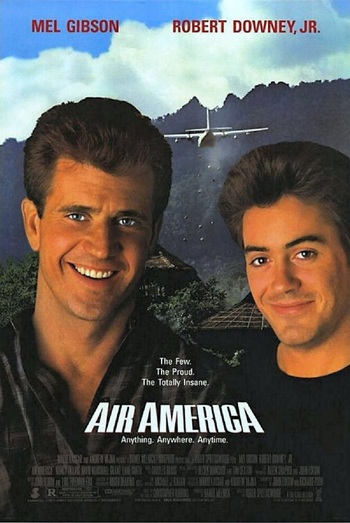 Billy: Jesus! Who the hell is shooting at us?
Jack: Over here, everybody shoots at us.
Advertisement:

1969: After buzzing a semi-driver, radio eye-in-the-sky Billy Covington (Downey) gets stripped of his pilots license. No sooner does this happen than he gets a job offer from Air America, a covert airlift organization operating out of Laos. Once there, he finds the company full of lunatics, with perhaps the looniest being Gene Ryack (Gibson), a self-proclaimed Buddhist who runs guns on the side. He also finds out the organization is secretly a drug-smuggling operation, run by Major Lemond (Ken Jenkins) and General Soong (Burt Kwouk).

Not to be confused with Air America Radio.