Film / All Eyez on Me 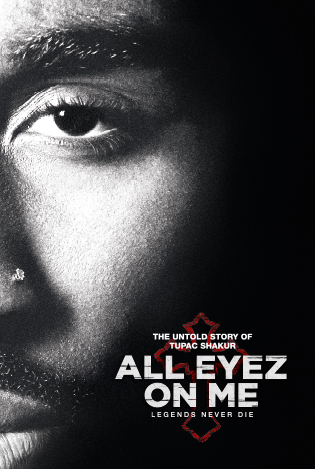 Afeni: I'm worried about...
Tupac: Ain't nothing to be worried about.
Afeni: Like all Black leaders you have a bullseye on your back, and today it just got bigger!
Tupac: But I ain't no Black leader! Not yet!
Afeni: And how are you not a Black leader?! The Vice President was just talking about you on the TV! Baby, you have to understand with The Panthers, it wasn't that we had guns or black leather, it was because of our message. We were transforming minds. They are going to come after you with everything you love. They're going to give you the tools that you need to destroy yourself!
Advertisement:

For the Tupac album this film is named after, go here.

All Eyez on Me is a 2017 Biopic centered around the life of rapper Tupac Shakur, starring Demetrius Shipp, Jr as the iconic rapper; along with Kat Graham, Danai Gurira, Lauren Cohan, Dominic L. Santana, and Jamal Woolard, the latter reprising his role as Shakur's friend-turned-rival The Notorious B.I.G. from 2009's Notorious (2009).

A large portion of the movie takes place while Shakur was serving time for sexual assault on Riker's Island between 1994 and 1995, with his life from childhood up to his conviction being told In Medias Res via an interview while he was imprisoned. The second half of the movie focuses on Shakur's life from his release from prison to his murder in Las Vegas in 1996.