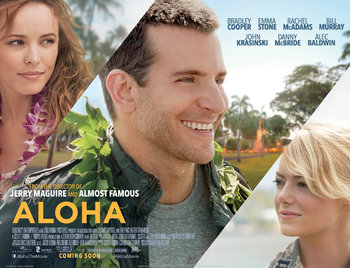 Aloha is a romantic comedy-drama written and directed by Cameron Crowe released in 2015.

Brian Gilcrest (Bradley Cooper) is a military contractor sent by a billionaire, Carson Welch (Bill Murray), to Hawaii to arrange the blessing of a pedestrian gate as part of a plan to build a new space launch center nearby. Since Welch is a close collaborator with the U.S. military, he is paired up with Air Force Captain Allison Ng (Emma Stone) by General Dixon (Alec Baldwin) and Colonel "Fingers" Lacy (Danny McBride) to make sure the deal goes smoothly. In the meantime, he makes peace with his ex-girlfriend, Tracy (Rachel McAdams), who has a daughter and a son and has gotten remarried to an Air Force pilot, Woody (John Krasinski).