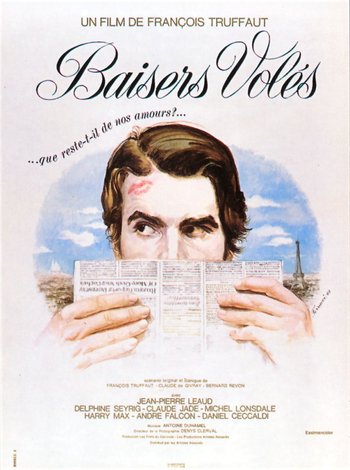 Stolen Kisses is a 1968 film from France directed by François Truffaut. It is the third film in his five-film series The Adventures of Antoine Doinel, which follows the character of Antoine Doinel from his juvenile delinquent youth to his somewhat disappointing adulthood.

This one finds Antoine, played as always by Jean-Pierre Léaud, leaving the army via dishonorable discharge, having been as much of a bumbling goof in military life as he was in civilian. He seeks out his old crush, Christine (Claude Jade). Antoine offers dogged devotion but Christine maintains a distance between them. Meanwhile, Antoine blunders his way through a series of jobs. Having been kicked out of the army he gets a job as a night clerk at a hotel, only to be soon fired from that position as well. He then gets work with a private detective agency, and is terrible at that job too. Sent to work undercover in a shoe store, he finds himself distracted from Christine by the store owner's sexy wife Fabienne (Delphine Seyrig).