Nobody Loves the Bassist 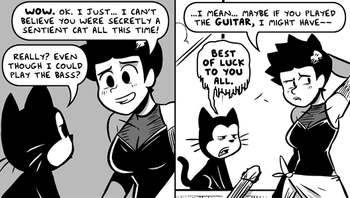 In the music industry, nobody has worse press than the bassist. The singer is almost always the first person who comes to mind when thinking of the band, the guitarist is the second (complete with Air Guitar), next there's the wild and crazy drummer/percussionists, then the keyboardist/pianist turning out a lightning-fast solo, and then maybe musicians playing instruments which are found in jazz, orchestras or cultural bands - saxophonists, violinists, banjo players, trumpeters, etc.

And last in line, if at all... the bassist. There are hardly ever any bass solos. There are relatively few bassist/singers. There is no hope. Okay, maybe not ZERO hope. For the short heroes' list of bass players who have risen above this cosmic injustice, see Lead Bassist.

This can be enforced or justified. The inherent structure of much rock and pop music encourages a simple, supportive bass line. This makes it hard for a bass player

to stand out naturally, and doubly hard to do so without simply showing off at the music's expense. So most of the time, a bassist doing his job properly ends up drawing relatively little attention to himself; bassists who try to defy this and push their way into a Lead Bassist role without actually taking the songs themselves into consideration will quickly piss off their bandmates and be shown the door. At worst, they may be treated as a Butt-Monkey or The Friend Nobody Likes.

Even if they don't make it as lead bassist, there are a few upsides, which would explain why so many bassists put up with this. Some people prefer to stay out of the spotlight, or just love playing bass too much to care about it. Others learn the instrument so they'll be in high demand. In fact, it's often said that finding a good bass player is one of the hardest parts about starting a band, while guitarists are a dime a dozen. And if no one pays attention to you, you don't have to worry about Loony Fans and Groupie Brigades (though you might be better off if they don't; compare My Friends... and Zoidberg).

This trope tends to be averted in jazz, soul, funk, and R&B music, especially from the '60s and '70s, where the bass is much more prominent than it is in rock and pop.

This trope refers to this phenomenon and media in which it is discussed. Compare Dumb and Drummer, which involves similar levels of disrespect but with outright insults instead of the musician simply being forgotten about.