Film / Eddie and the Cruisers 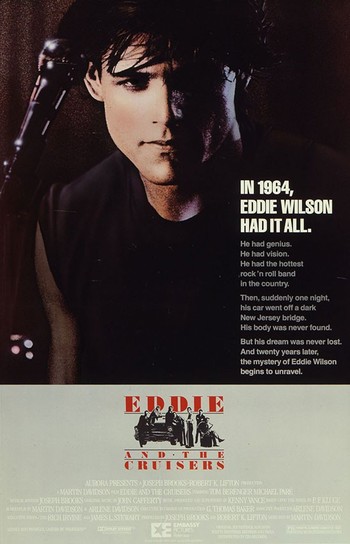 And this is Eddie.
Advertisement:

Eddie and the Cruisers is a 1983 American film directed by Martin Davidson with the screenplay written by Martin and Arlene Davidson, based on the novel by P. F. Kluge.

The movie follows a fictional '60s rock band called Eddie and the Cruisers. The band makes a name for itself while playing regularly at a Somers Point, New Jersey club called Tony Mart's. It is there that they meet Frank Ridgeway (Tom Berenger), whom Eddie Wilson (Michael Pare) hires to be the band's keyboard player and lyricist. Doc Robbins (Joe Pantoliano) and Sal Amato (Matthew Laurance) are skeptical of hiring Frank, who is not a trained musician or experienced song writer, but Eddie believes that Frank is crucial to the band's development. The movie then continues to detail the rise of band to the top of the charts as well as the lives of the band members involved. When the movie begins in the 1980s, the band's music is experiencing a revival, Eddie has been missing (and presumed dead) for 18 years, and a documentary filmmaker (Ellen Barkin) is looking up the old members.

The film was followed by a sequel, Eddie and the Cruisers II: Eddie Lives! in 1989.