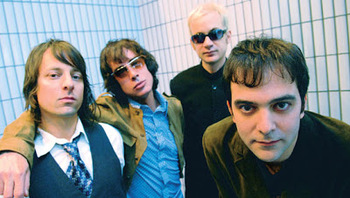 (L-R) Brian Young, Jody Porter, Chris Collingwood, and Adam Schlesinger
Stacy's Mom has got it goin' on!
She's all I want, and I've waited for so long!
Stacy, can't you see? You're just not the girl for me.
I know it might be wrong, but I'm in love with Stacy's Mom.
—"Stacy's Mom"
Advertisement:

Formed in New York in 1995 and named after a now-out-of-business lawn ornament store in Wayne, New Jersey, Fountains of Wayne was a Power Pop band formed by Chris Collingwood (vocals & guitar) and Adam Schlesinger (bass) with Jody Porter (guitar) and Brian Young (drums). Collingwood and Schlesinger originally met as freshman roommates at Williams College in Massachusetts and would record with various bands before splitting up to start two separate bands before coming back together and forming Fountains of Wayne under a deal with Atlantic Records. Their Self-Titled Album dropped in 1996, and their most famous song is the Grammy-winning "Stacy's Mom" off their 2003 album Welcome Interstate Managers.

The band would continue to be active until the early 2010s, whereby the band has more-or-less dissolved after having a frustrating experience recording their final album, 2011's Sky Full of Holes. The group had not ruled out a future reunion, but Adam Schlesinger's death from COVID-19 in April 2020 has put a possible return into jeopardy. The band reunited for a virtual tribute show for Schlesinger a few weeks later, with indie rock singer Sharon Van Etten filling in on bass, which has been their final appearance as a group to date.

Their music often describes the lives of ordinary people, and alternates humor with a certain wistfulness.