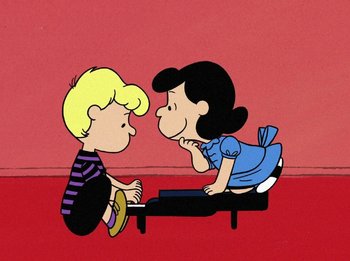 Lisa: Do you play?
Colin: Just piano, guitar, trumpet, drums and bass.
Lisa: [thinking] He's pure gold! For once in your life, be cool!
— The Simpsons Movie
Advertisement:

Ah, music. What could be better than enjoying some tunes? Well, for a lot of girls, the answer is obvious: it's the person behind the instrument they like. Artists Are Attractive, after all, and so musicians are just inherently appealing.

After all, dating a musician has some perks. He could serenade you outside your window, or create songs just for you. He could help you get your toe into the industry, or get you free tickets to his next gig. If he does classical, he can play for your parent, winning them over easily. And even if he's not even close to being famous, but just likes to play, he'll often be charming, passionate, smart, talented... or at least, that's the ideal here. Because what's a musician without the personality to match?

And, even if the girl isn't into music herself, there's just something about musicians that make them popular love-interests. The crush will play music, regardless of what the girl actually thinks about music. This character is, after all, likely meant to appeal to the audience as well, who are also bound to find the boy more attractive just because he can play an instrument.

That said, if a character attempts to invoke this, results may vary. If their only reason for picking up an instrument is to impress some girls, they probably won't have the motivation to actually learn to play.

This role, of course, only properly applies to the rock-star type or classical musician, so the Polka Dork need not apply. And because All Drummers Are Animals and Nobody Loves the Bassist, this rarely applies to them, too.

If he plays rock music, this will usually overlap with All Girls Want Bad Boys.

A subtrope of Artists Are Attractive. Compare Quirky Ukulele for the female variant, as well as the Elegant Classical Musician. Finally, see Groupie, for the dedicated female fans of an actual celebrity musician, which overlaps.