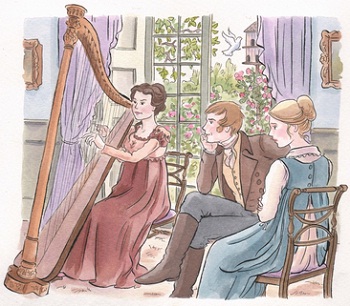 Edmund is enchanted by Mary the harpist.
Fanny is somewhat less pleased.
"A young woman, pretty, lively, with a harp as elegant as herself, and both placed near a window, cut down to the ground, and opening on a little lawn, surrounded by shrubs in the rich foliage of summer, was enough to catch any man’s heart."
— Narrator of Jane Austen's Mansfield Park
Advertisement:

Maybe the way she can handle the instruments. Maybe her skilled hands, the way she blows that oboe, or the sound she makes when the song is about to climax. Whichever it is, there is something about playing instruments that really pulls men's strings.

Apparently, men aren't so uncultured if the culture in question is served by a hottie.

Applies to all female classical musicians no matter what instrument they are playing. Might apply to male classical musicians too. Compare Sitting Sexy on a Piano, where the fetching woman on the piano isn't the one playing it. Subtrope of Artists Are Attractive. See also Classical Music Is Cool, which may be a reaction if the hottie inspires someone to pay attention to the music, and Girls Like Musicians, where the appeal comes from the very fact that the boy is a musician.