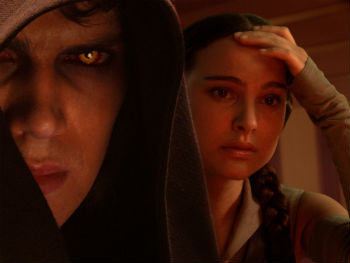 The love story that enslaved a galaxy.
"I feel like we hear the phrase "love and justice" a lot, but no one seems to ever mention "love and evil". An evil guy whose love is deeper than the ocean. If the object of affection is narrowed down to Celty, then I am one. If it's for the love between Celty and me, I'm pretty sure I can become as bad as bad can be."
— Shinra, Durarara!!
Advertisement:

The Power of Love ain't always a good thing.

How many times have we heard this? "I did this for you! So we could be happy together!" Love can be a strong motivation for good. But if you are in a Love Triangle, or your loved one is dying of cancer, it can also be a great motivation for murdering the hypotenuse, making a Face–Heel Turn, embracing The Dark Side, selling your soul to the devil, raping your love interest, or cursing yourself by opening the Tome of Eldritch Lore, up to causing The End of the World as We Know It. And if that person should die, they are willing to go to horrific lengths to bring them back.

This often happens when a simple love spirals into a dangerous obsession; the love goes out of control, becoming their number-one motivation beyond everything else, including their reason, morals, and others' well-being, and they self-destruct in the end. A common, yet, severe manifestation of this is usually cries of "If I Can't Have You… Then No One Will." If both lovers follow the downward spiral, you may end up with the Outlaw Couple or Unholy Matrimony.

Sometimes, it's not quite "love" but the lack thereof that drives a rejected suitor to serve the Big Bad for revenge. The object of their affections will probably think whatever damage they cause is All My Fault.

Sometimes, the person who will go to extreme, evil lengths for love is a villainous Stalker with a Crush who has no grasp of the true concept of love, and emulates it as best he can. With knives.

Sometimes, it's a genuinely well-meaning, severely Genre Blind Love Martyr who wants their beloved to be happy or protect them from their enemies, even if it means damning themselves in the process. They will hear endless rants of What Were You Thinking? before breaking out in cries of My God, What Have I Done? and dying nobly, using their last breath to assure their beloved, "I still love you. I always will love you."

Frequently, the motivation for the sympathetic Fallen Hero to fall. The belief that, had he been a little less lenient, a little less forgiving, that special someone who was Stuffed In A Fridge might still be alive. Leads into Well-Intentioned Extremist territory.

An especially unpleasant extent of how Love Hurts and Makes You Crazy. Might start with, or end in, Destructive Romance. Since this is both a Love Trope and a Betrayal Trope, there will be spoilers. See Yandere for a version of this trope that is mixed with, or camouflaged by, Moe tropes. If the character who is in love was evil before falling in love, it's a Villainous Crush. Contrast Evil Virtues, where a villain has love as a good trait, or Love Is a Weakness, where a (usually villainous) character avoids love for fear it will spoil them.