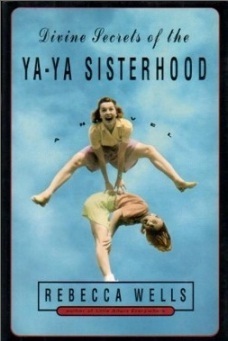 Divine Secrets of the Ya-Ya Sisterhood is a 1996 novel by Rebecca Wells. Adapted into a 2002 film by Callie Khouri. Both works follow the stories of four lifetime friends who make up their own secret society in Sweet Home Alabama, the Ya-Ya Sisterhood. The girls are scandalous, spunky, spirited young women who grow up to become...well, there's where the problems really start.
Advertisement:

Viviane Joan "Vivi" Abbott Walker, the leader of the Sisterhood, becomes an abusive alcoholic who beats her (three or four, depending on whether you're watching or reading) children in a dissociative episode wherein she becomes convinced that the reason her offspring are so annoying to her is because they are possessed by the devil. Years later, the eldest daughter, Siddalee Walker, now a successful playwright, accidentally exposes the whole incident in a magazine story which describes Vivi, quite accurately, as a "tap-dancing child abuser". She is disowned. Vivi's three friends decide to fix matters by kidnapping Sidda away from her fiancee and taking her home to force the two to talk.

While this is the central chain of events, the story details the events surrounding the situation, moving through time to explore friends, relatives, heartaches and joys. It recounts events from the Sisterhood's childhood and Sidda's, even reaching back to the adolescence of Vivi's mother on a couple of occasions, and paints a picture of generations of deeply flawed women who are nonetheless, by degrees, learning to function as individuals and form their own families.

Divine Secrets of the Ya-Ya Sisterhood is a sequel to Wells' earlier novel, Little Altars Everywhere, in which the child abuse is a lot more sexualized and egregious. Arguably a Downer Ending: The point seems to be that while Siddalee has gotten past her childhood and used it to grow...she's got three siblings who are yet to have such experiences.

Alternative Title(s): Divine Secrets Of The Ya Ya Sisterhood