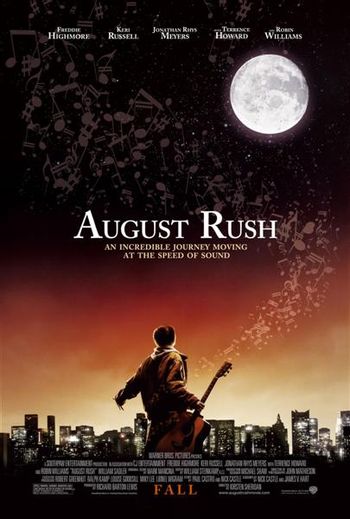 "I believe in music the way that some people believe in fairy tales."
Advertisement:

August Rush is a 2007 Academy Award-nominated drama film directed by Kirsten Sheridan and written by Paul Castro, Nick Castle, and James V. Hart, and produced by Richard Barton Lewis. It has been called an up-to-date reworking of the Oliver Twist story by Charles Dickens.

A boy named Evan Taylor (Freddie Highmore) lives in an orphanage but believes that his parents are alive. He believes that the music that he hears all around him (which others interpret as background noise) is his parents communicating with him. He meets a counselor, Richard Jeffries (Terrence Howard), of the New York Child Services Department. Evan tells Jeffries that he does not want to be adopted because he believes his parents are still alive and will come to collect him eventually.

Through a series of flashbacks, his parents are revealed to be Lyla Novacek (Keri Russell), a famous concert cellist, and Louis Connelly (Jonathan Rhys Meyers), an Irish guitarist and lead singer of a rock band. Lyla and Louis spent one romantic night together and never saw each other again - they were forced to separate by Lyla's domineering father. Lyla became pregnant; her father did not approve because he wanted Lyla to have a successful career without the obstacle of a child. After an argument with her father, Lyla ran out of a restaurant and was hit by a car. While in the hospital, she gave birth to a son. Afterward, she was told by her father that her child had died, but he had been delivered successfully and then given up for adoption by her father, who forged Lyla's signature on the necessary paperwork.

Louis has never forgotten Lyla and does not know about Evan. Both have since given up performing; Lyla is a music teacher in Chicago, and Louis is an unhappy financial minion in San Francisco.

Evan believes deeply that as long as he follows the music he hears and reacts to it, he will have a chance to be found by his parents. He runs away from the state institution and makes his way to New York City, where he is taken in by a man known as "Wizard" (Robin Williams), who houses various orphans and runaways, employing them to play music on the streets and taking a large cut of their tips. Evan immediately proves to be a musical child prodigy. Wizard enlists him and gives him the name "August Rush", convincing him that he will be sent back to the orphanage if his real name is ever discovered...