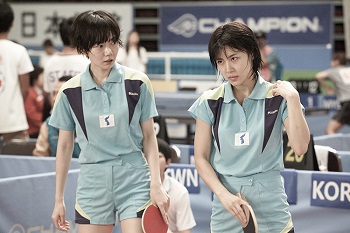 As One (코리아, "Korea") is a 2012 film from South Korea, directed by Moon Hyun-sung. It tells the Real Life story of the unified 1991 Korean team that competed at that World Table Tennis Championships.

During a thaw in relations between the two Koreas, the powers that be elect to combine the North Korean and South Korean table tennis teams into a single unified team. The South Korean players are none too happy about being paired with the North Korean players and losing playing time, while the North Koreans are uncomfortable with the new arrangement as well. Specifically, star South Korean ping-pong player Hyun Jung-hwa is incensed at being paired up with her North Korean rival, Ri Bun-hi (played by Bae Doona of The Host (2006) and Cloud Atlas). Eventually, the players gain each other's trust and form bonds of friendship, as they travel to Japan to play in the World Table Tennis Championships and face off against the powerful Chinese ping-pong team.