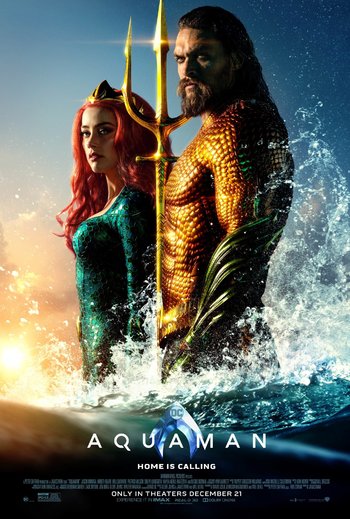 "Atlantis always had a king. Now it needs something more."
"A war is coming to the surface whether you like it or not. And I'm bringing the wrath of the Seven Seas with me."
—King Orm Marius
Advertisement:

Aquaman is a 2018 Superhero movie based off the DC Comics superhero of the same name, directed by James Wan. It is the sixth movie to be set in the DC Extended Universe.

Following the events of Justice League, Arthur Curry/Aquaman (Jason Momoa), the son of Queen Atlanna (Nicole Kidman) and the lighthouse keeper Thomas Curry (Temuera Morrison), claims his birthright as ruler of the underwater kingdom of Atlantis, with the help of Mera (Amber Heard) in order to prevent his half-brother king Orm (Patrick Wilson) from invading the surface. To do so, he goes on a quest to find a powerful weapon, the legendary trident of King Atlan.

open/close all folders
Tropes A to B
Tropes C to F
Advertisement:
Trope G to L
Tropes M to R
Tropes S to Y
Born on the wrong side of the ocean
With all the tides against you
You never thought you'd be much good for anyone
But that's so far from the truth