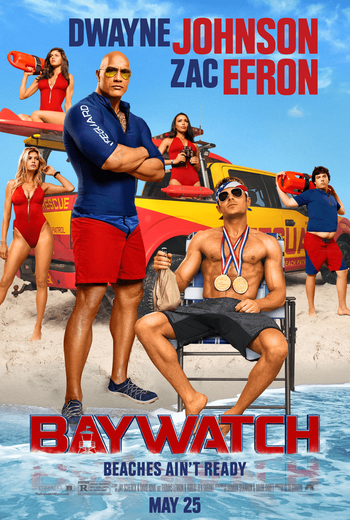 Baywatch is a 2017 comedy film starring Dwayne Johnson and Zac Efron, based on the television series of the same name.

Reimagined as an Affectionate Parody of the original Baywatch series (similarly to the Jump Street films' treatment of their own source material), this film pokes fun at its premise while also embracing it — and provides lots of eye candy for both the male and female gaze.

Mitch Buchannon (Johnson) is a no-nonsense lifeguard who is forced to work with cocky Olympian Matt Brody (Efron) when evil local club owner Victoria Leeds (Priyanka Chopra) threatens to overrun the beach with crime and corruption.

A sequel is currently being planned