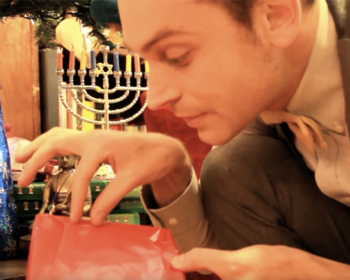 Pa Kent: This little guy was crazy for Christmas. We used to wrap his presents in lead foil so he couldn't peek.
Clark Kent: You mean Santa wrapped them.
— Justice League
Advertisement:

There are some people in fiction as well as in real life who try to peek at their presents early. Naturally, the person who is giving the presents, usually a parent, tries to find a hiding place where the presents can't be found before the big event. Usually done with children around Christmas time, but the trope can be used for other gift-giving occasions as well.

A variant happens when your character finds a hidden gift meant for somebody else, and assumes it's for them. Hilarity Ensues when the gift-giver tries to find a way to tell them the truth or tries to procure a copy of the present. This situation may be Played for Drama when the character realizes that the gift they found hidden wasn't given to them at all, and they might start suspecting infidelity.

Jiwi tries to peek in the present that June gave him, but it backfires massively.

Jiwi tries to peek in the present that June gave him, but it backfires massively.