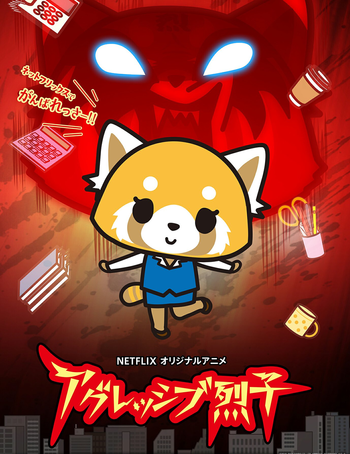 "This girl has a secret up her sleeve, and a mic in her purse!"
Advertisement:

Aggretsuko, fully known in Japanese as Aggressive Retsuko, is an anime by Sanrio based upon the characters created by Yeti. It stars the beleaguered office worker, Retsuko, a 25-year-old single red panda, who seems cute and submissive on the outside, but is secretly seething with Suppressed Rage at her stressful work in an accounting department and annoying coworkers and bosses. How does she deal with it, you ask? By singing Death Metal about her irritation, of course! After 5 years of working the daily grind, her relationships with her various co-workers are starting to shift, and slowly begin to open up in ways that can change her life for the better...or for the worse.

This is where it gets a bit interesting. There are two series with the Aggressive Retsuko name: one is made by the Tokyo Broadcasting System, and the second is a collaborative effort between TBS and Netflix, but both have similar premises.

The TBS series was a series of 100 self-contained one-minute episodes (except the first episode, which was 30 seconds longer) that was broadcast as a segment of the variety show Ō-sama no Brunch, starting in 2016 and ending in March 2018. The shorts focused more on the frustrations of random situations that Retsuko ended up in, such as being asked to pick up the bill at a friend meet up.

The collaborative TBS x Netflix series, which began with a ten-episode season that was released in 2018, is different from the shorts as it focuses more on Retsuko pushing through bigger societal problems, such as dealing with horrible bosses, and the problems of falling straight into love. The episodes are also longer (around 15 minutes) and follow a new continuity compared to the original series. Adaptation tropes do apply to this series.

Following the release of Season 3, a spinoff series of shorts starring the OTMGirls premiered on their official Youtube channel.

A series of comic books based on the series is being published by Oni Press. The first issue was released on February 5th, 2020.

Renegade Game Studios produced the Aggretsuko Work/Rage Balance Card Game where players assume the roles of mild-mannered office workers that have to balance their work with their hidden inner rage.