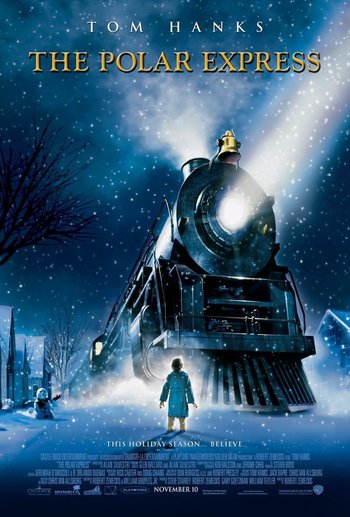 This holiday season... Believe.
"One thing about trains: it doesn't matter where they're going. What matters is deciding to get on."
— The Conductor
Advertisement:

The Polar Express is The Film of the Book of the same name by Chris Van Allsburg, who served as one of the film's executive producers.

A young boy, straining to hear the silver bells of Santa's sleigh on Christmas Eve, instead hears a train's whistle. He goes outside to find a magical train, the eponymous Polar Express, which was sent to pick up the boy and hundreds of other children to go to the North Pole and Santa's workshop. There, one of the passengers will receive "the first gift of Christmas".

Released to theaters on November 10, 2004 by Warner Bros. and Castle Rock Entertainment, the film was the very first animated feature to be made entirely with Motion Capture technology. It was directed, co-produced and co-written by Robert Zemeckis, with Tom Hanks (who also served as an executive producer) doing much of the voice work and performance capture.

The Film of the Book provides examples of:

At one time, most of my friends could hear the bell. But as years passed, it fell silent for all of them. Even Sarah found, one Christmas, that she could no longer hear it's sweet sound. Though I have grown old, the bell still rings for me. As it does for all who truly believe.
Feedback

When Hero Boy tastes the Hobo's coffee, he is late to realize he uses HIS SOCKS as the filler.

When Hero Boy tastes the Hobo's coffee, he is late to realize he uses HIS SOCKS as the filler.