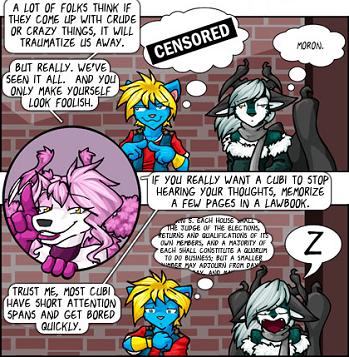 Dr. Destiny: What's that stupid song going through your mind?!
Batman: It's what's keeping you out, Johnny.
— Justice League, "Only a Dream, Part 2"
Advertisement:

In order to defeat Telepathy, frequently all a character has to do is fill their mind with something useless. This can take several forms. Often mentally reciting nursery rhymes or acquiring an Ear Worm will do the trick. Sometimes characters use especially compelling fantasies; conversely, sometimes they deliberately force their thoughts to be as mundane as possible. An especially badass and unscrupulous user can fill his mind with Mind Rape thoughts (or just bad memories of very horrible events from their life) in order to repel anyone trying to read it. In any case, the goal is to drive out whatever thoughts they don't want the telepath to know about.

This trope often provides a way for Muggles and Badass Normals to get the upper hand on characters with Psychic Powers. However, it's usually implied that keeping up an effective screen of Psychic Static requires a heroic level of mental discipline: otherwise, the telepathy wouldn't ever be useful in the first place.

Alternatively, psychic static may simply be a result of someone trying to read someone's mind but can't because the mind is foreign or alien, at least in the way it works when compared to the mind reader. This is usually not intentional on the part of the person whose mind is being read, and their mind itself is not unreadable, merely incomprehensible to the mind reader. In these instances, the thoughts will be in forms that the reader cannot interpret, such as a man who can only speak English reading the mind of someone who only speaks French.

One of the ways a character can give someone a Poke in the Third Eye. For a defense that's always on, see Psychic Block Defense. For madness working this way, see Insanity Immunity.

Occasionally, a psychic or a normal may need to evade a telepath using Psychic Radar to scan for the presence of sentient thought. Depending on the situation, the mundane thoughts trick may let them blend in amongst the minds the Radarpath expects to find. Sometimes they may have to employ more extreme methods such as blanking their mind or thinking thoughts that make them seem like an animal mind.

Often overlaps with the Jedi Mind Trick, but is generally more passive.