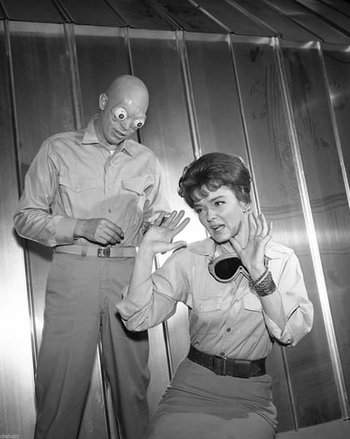 "Sometimes it's so easy to forget that part of me that's still human."
The Control Voice: At this very moment, our horizon is menaced by two explosive forces, both man-made. One is a deadly wonder; the other, wondrously alive. Both forces have compelled Man to reach out for worlds beyond his own, new worlds where he may find peace, and room to grow. This is the first of those new worlds. The United Nations of Earth have claimed it, and called it Annex One. It is almost identical to Earth, except that there is no night -— sunlight is constant. Early reports from the small expeditionary team stationed on Annex One indicated that the ancient planet appeared suitable for colonization by Earth's overflowing population. But the most recent reports have contained unspoken, oddly disturbing undercurrents, and the United Space Agency has decided to investigate. The man chosen: Dr. Evan Marshall, psychiatrist...

A human colonist on Annex-1 is turned into a mutated being with grotesquely enlarged eyes who can read minds, go without sleep—and kill with his fatal touch.

The Control Voice: The forces of violence and the forces of nature compel man to reach out toward new horizons, where peace and sanity may flourish, where there is room to grow. But before we run, should we not first make certain that we have done all that can be done here to end madness, quiet the disturbers of peace and make room for those who need so little to grow in?

"Reese, I'm not in the habit of troping people":