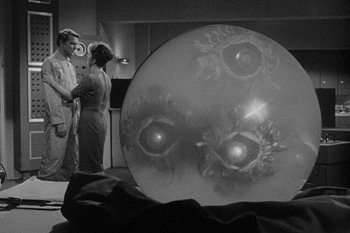 Nosy Grippians eavesdrop on Stocker and Diana.
The Control Voice: In Man's conquest of space, his own moon must be the first to surrender. From there he will step his way across the heavens to the edge of infinity. Each step will be as uncertain as the last, yet each will bring him closer to ultimate truth. Lunar Expedition One: Here a handful of brave scientists and technicians pave the way to the future. Their mission: to collect information that will eventually enable Man to inhabit the Moon; to use the Moon as a springboard to the stars. Once during each twenty-four-hour period, a force of three, commanded by General Lee Stocker and including Lieutenant Travers and Major Clint Anderson, makes its slow, uncharted way across the lunar surface, a surface whose depths and desires are, as yet, unprobed…

Plant-like aliens threaten to terrorize a lunar base unless they surrender the sphere containing refugees from their tyrannical government.

The Control Voice: The steps Man takes across the heavens of his universe are as uncertain as those steps he takes across the rooms of his own life. And yet if he walks with an open mind, those steps must lead him eventually to that most perfect of all destinations, truth.

"The mind earns by doing, the heart earns by troping":