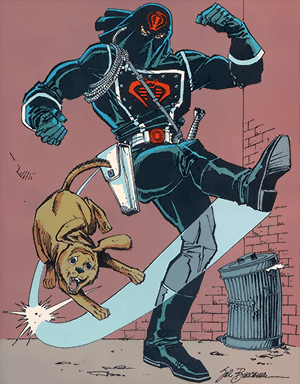 Would-be Dictator. Murderer. Kidnapper. Terrorist. Puppy punter.
"In the old days villains had moustaches and kicked the dog. Audiences are smarter today. They don't want their villain to be thrown at them with green limelight on his face. They want an ordinary human being with failings."
— Alfred Hitchcock
Advertisement:

When a character does something evil, cruel or very mean for no apparent gain, because the author wants to demonstrate that he's not a nice guy and shift audience sympathy away from him.

Why this trope works could be expressed in the words of William Cowper: “I would not enter on my list of friends (though graced with polished manners and fine sense, yet wanting sensibility) the man who needlessly sets foot upon a worm.” In other words, a cruel act, no matter how trivial, establishes someone as a cruel person. Conversely, the creator may show a character being kind for no apparent gain, to demonstrate that the character is a nice person and someone the audience is meant to cheer for. Both devices are used to help the audience become emotionally invested in the story.

What separates this trope from a character's other evil or cruel acts is that this bit of evil is gratuitous. It doesn't get the character anything or even advance the plot. The sole reason for this story beat existing is to place one or more characters squarely on the wrong side of the Rule of Empathy.

Dog-kickings can be verbal as well, when a line of dialogue is used to shock the audience with its sheer repugnance. If it's uttered in the presence of the hero in an action series, he'll echo the audience's thoughts and tell the villain "You're Insane!"

Needless to say, this trope can be enacted without harming any dogs. Any act or statement that shows the character's meanness or outright evil will do, such as a boss demanding an employee come in to work during Christmas when the employee's kid is in the hospital, or a passer-by stealing from a blind beggar's coin dish, or The Dragon inflicting a vicious No-Holds-Barred Beatdown on the hero or one of his True Companions or Protectorate. A Politically Incorrect Villain can kick the dog by showing gratuitous racism, sexism, homophobia, or some combination of such non-PC traits. If the event happened off screen in the past, just have Bob fondly recall the incident and make it clear that he has no remorse whatsoever. Bingo, mission accomplished.

If the evil act is directed toward an animal, however, a dog is usually the victim of choice, partly out of connotations of blind loyalty, partly from tradition. Arguably, however, substituting a cat can be even more shocking. After all, even bad guys like cats. So, the argument goes, if Bob goes out of his way to harm one, he must really be a bastard.

This trope is common in horror-based Monster of the Week shows, often to set up the Asshole Victim for the Karmic Twist Ending. Anthologies are especially prone to this, as they have to set up their villains really quickly, since they have only one episode to tell their story. This can be played up by having the very same kick of cruelty be the cause of their downfall. At the very least, it is designed to let you know who is going to lose at the end. The opposite of Karma Houdini.

In cartoons, someone who does this can be legally harassed by Bugs Bunny, Daffy Duck, or the Warner Brothers and their sister Dot. A troll like Screwy Squirrel, however, won't wait that long.

If what is supposed to be a character's Kick The Dog moment is excessively horrible, cruel, or otherwise despicable enough to make an audience lose all sympathy for him, then he's crossed the Moral Event Horizon, if he's not on the other side of it already. If the Dog in question is someone the character cares about and discovers Being Evil Sucks, then they've Kicked the Morality Pet and might be in time to avoid a Face–Heel Turn. If the dog belonged to a minion, expect it to help cause a Mook–Face Turn because Even Mooks Have Loved Ones. On occasions, if karma works in the dog's favor, he'll manage to get a last laugh. On even rarer occasions, after being pushed around too many times, the dog may decide to plan against the Big Bad for his own ambitions, because Being Tortured Makes You Evil. When the dog-kicking is done in a way that (usually inadvertently) increases sympathy for the villain, it becomes Strawman Has a Point. If the character appears to be likable or sympathetic when introduced and the dog-kicking proves that he is actually evil, that is Bait the Dog. If the villain shoots for this trope but fails to actually do anything seriously evil, it's Poke the Poodle.

Of course, the crux of this trope isn't just the cruel act; it's also about the innocence of the victim, i.e. they have done nothing to warrant their abuse. If the target is an Asshole Victim instead, the cruel act can become a sympathetic one for the villan/anti-hero instead. If going after the Acceptable Target is a coincidence, it becomes Kick the Son of a Bitch; if the victim was specifically targeted for their assholery, it becomes Pay Evil unto Evil.

Kicking the Dog is also done for no practical reason apart from the meta-reason of demonstrating the dark side of the kicker. If the perpetrator does it because they care about their victim and want to help them somehow, they're being Cruel to Be Kind; if their actions have a broader purpose à la doing what had to be done, they're trying to Shoot the Dog (that's what you do when Old Yeller has rabies, after all).

This trope is often used to counter or prevent a character from being seen by the audience as a Designated Villain or Strawman Has a Point. These tropes tend to occur when poor writing or characterization causes a character to become more sympathetic to the viewers than intended. Since the writers can't just give these villains their just desserts if the audience likes them too much or prefers to take their side on an issue, an effective Kick the Dog moment can make them lose their sympathy and make them punishable again. This can backfire though.

A sign that Evil Is Petty. Compare with Can't Get Away with Nuthin', And Your Little Dog, Too!, Kick Them While They Are Down, The Dog Bites Back,Threw My Bike on the Roof, I Will Punish Your Friend for Your Failure. See "If You're So Evil, Eat This Kitten!" for when bad guys do a Kick The Dog test to make sure undercover heroes are really evil, and Dog-Kicking Excuse for when the would-be dog-kicker has to psych themselves up to doing it.

Contrast Pet the Dog (proving you're good) and Adopt the Dog (going from Neutral to Good).

or "Kick the Dog", you'll be wanting The Chain of Harm.

WARNING! Enacting this trope, particularly in the presence of a heroic character, may result in the following: Berserk Button, Roaring Rampage of Revenge, Curb-Stomp Battle, The Dog Bites Back, the aforementioned Laser-Guided Karma etc. Do not attempt this trope unless you're feeling suicidal.

Can We Keep Him Boss? No!

Marcel slams the door on Fernando's face in a rather cruelly hilarious moment despite Tipa the dumber one of Marcel's henchmen asking if they could keep him due to Fernando being an orphan. To add insult to injury Marcel had also only payed half of what he promised Fernando in a earlier scene.

Can We Keep Him Boss? No!

Marcel slams the door on Fernando's face in a rather cruelly hilarious moment despite Tipa the dumber one of Marcel's henchmen asking if they could keep him due to Fernando being an orphan. To add insult to injury Marcel had also only payed half of what he promised Fernando in a earlier scene.