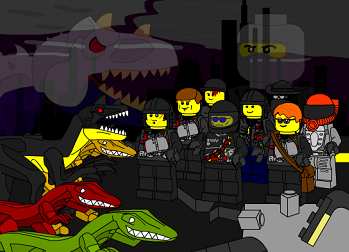 Everybody was happy in the city... until suddenly, dinosaurs.note From left to right: Rex, Reptile, Hotwire, Rotor, Andrew, Dust, Zachary, and Dr. Cyborg. In the background: Dr. Rex and Specs.
"One would think that the two Dino Attack agents had the upper hand due to their sniping post, but the veteran agents knew that one should never believe in impossibilities in a war where Mutant T-Rexes could lay eggs in banks and not break much, and so be chock full of personal stories that the database read like a convoluted TV show that made LOST look simple."
—Stranger
Advertisement:

Dino Attack RPG is a text-based Role-Playing Game revolving around the conflict of Man Versus Prehistoric Monster... in a post-apocalyptic setting.

First created in 2005 in a small corner of the internet, the Dino Attack RPG defied expectations and proved popular enough to run over seven years. It followed the life stories of hundreds of characters all at once, and occasionally the paths of the characters would cross and result in team-ups or ridiculous conflicts. After a dark age in which the RPG lost most of its audience, it rose from the ashes with a new system that forced players to team up on overly-long drawn-out quests that sometimes end in failure. In addition to being confusing as heck, it's full of death, despair, betrayal, violence, and destruction.

... Wait, this is based upon an unpopular half-year LEGO line?

Directly inspired by Alpha Team: Mission Deep Freeze RPG, this Play By Post Role-Playing Game takes the idea of LEGO's shortlived Dino Attack line and runs with it, depicting the entire LEGO Planet in a post-apocalyptic state thanks to the rampages of these Mutant Dinosaurs. In addition, it creates a wide cast of characters, each with his or her own extensive backstory, as they band together to take on the Mutant Dino threat. This war takes the cast to Nostalgia Levels inspired by everyone's favorite LEGO themes while creating new and original storylines. This Adaptation Expansion answers many of the original toyline's unsolved mysteries, such as the origins of the Dino Attack, and brings it to places Darker and Edgier than The LEGO Group could have possibly imagined.

Over the course of seven years, the RPG has gone through a large number of players, each with their own distinct style. The RPG is hosted by PeabodySam, and some of its more notable writers include Kotua in Space, Chronicler of Ko-Koro, TakunuvaC01, Jackson Lake, Atton Rand, Toa Antrakha, Andrewnuva199, that guy from that show, Brikman McStudz, and avmatoran.

. After the BZPower forum upgrade, Dino Attack RPG was finished in the form of Dino Attack: At War's End, which can be found here

. Unfortunately, Dino Attack RPG ultimately got Screwed by the Network on both fronts; the original Dino Attack RPG, along with the rest of the BZPower Forum Archive, was lost in a hacking incident, while At War's End was turned into an unreadable wall of text

following a formatting update on the new forums. As a result, for those who may be potentially interested in reading the original RPG, BZPower is not the website to use.

Instead, PeabodySam and Andrewnuva199 compiled the RPG into two downloadable archives for Dino Attack RPG

and Dino Attack: At War's End

. These archives include editor's notes to establish continuity and canonicity, as well as filling in gaps for the original RPG.

Starting in 2016, a Comic-Book Adaptation titled DINO ATTACK: Saga of a Conflict

was being developed by Mustache Maniacs Film Co.

, a group best known for making brickfilms. A trailer can be viewed here

, advertising the comic and the tie-in playsets. More playsets were planned but ultimately cancelled in April 2018, while the comic was reworked into an introduction to the RPG rather than a complete adaptation.

, or downloaded in DOCX

Additionally, Andrewnuva199 initiated another fifteenth anniversary project in 2020, reuniting old Dino Attack RPG players on Discord to collaborate on a series of stories acting as a "Where Are They Now?" Epilogue for their cast. While the Discord server is private, PeabodySam is making the PDFs publicly available through a Google Drive

, obviously. In fact, during the Development Hell between Dino Attack RPG and Dino Attack: At War's End, the writers kept themselves busy by writing this very TV Tropes page on the wiki.