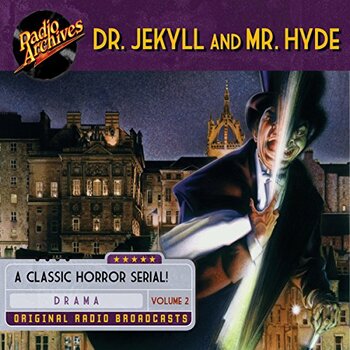 It took the genius of Robert Louis Stevenson to fashion this tale of the dual forces which are forever at war in every human breast—the powers of good and evil that lie dormant in us all. And he has given us a tale so weird, so strange and yet so filled with the eternal conflict of man's immortal soul, that we who hear it stand petrified, because in the tormented character of this strange fantasy... we see ourselves.
Advertisement:

A 1932 52-part radio adaptation of The Strange Case of Dr. Jekyll and Mr. Hyde, starring George Edwards. Focusing on Dr. Henry Jekyll's life from childhood until death, it expands upon the novella considerably while adding common tropes found in adaptations, such as Jekyll being a younger man and having a love interest or two. Jekyll also struggles with Hyde's evil his entire life, occasionally acting monstrous with little or no provocation.

The entire series can be listened to for free

This radio drama contains examples of: