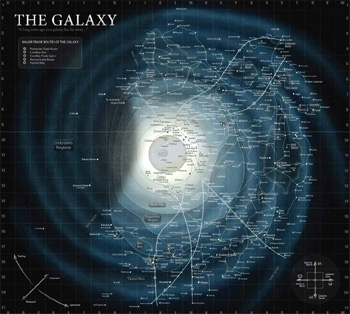 The movies may show you a dozen planets; but the galaxy far, far away is in fact a pretty large place.

The 'Verse may branch out across different media as the fandom demands. There may be comic books, tie-in novels, movies, novelizations, video games, etc. Sometimes the TV show is itself a branching-out of a 'verse that originated in another form (such as comics, as in the Marvel Universe or The DCU).

Expanded Universe refers to everything that is not the primary medium. All that other stuff.

This can create a schism in fans. Some believe the entire Expanded Universe is canon. Others reject it all. Others pick and choose based on closeness to the writers of the primary medium. Expanded Universe material is usually written so that it can be fit in to the canon without having to alter the canon itself. However, later developments in the actual series can make it definitively out-of-continuity, especially when the main series decides to explain a mystery (such as a character's future) in a way that contradicts the Expanded Universe.

Even if it isn't canon, the Expanded Universe often serves as a place to apply handwavium to the canon through retcons; this may verge on professional-grade Fan Wank.

The term in fiction dates back to a collection of Robert A. Heinlein stories, but its use to refer to material for a franchise beyond its source came from Star Wars, which has an extensive Expanded Universe covering events before, during, and after the films. The Star Wars Expanded Universe even has its own page.

Note: the "primary medium" is usually the original one, but not always. For instance, few would dispute that the primary medium of the Buffyverse is the 1997 TV show, not the 1992 movie (which is only canon for the television series in the form of its altered comic book adaptation, which is based off of Joss Whedon's original script for it).

After a show's cancellation or end, the Expanded Universe may become the only place to get new material involving The 'Verse (outside of Fan Fic, of course), continuing the canon in the minds of the readers/viewers. However, if a show is later brought back, this "new canon" may be cancelled out, creating yet more conflict.

Compare Adaptation Expansion, which concerns never-before-seen developments of certain aspects in a retelling of one specific work or set of works in a franchise when they're adapted into another medium. See also Restricted Expanded Universe.

Because of Acronym Confusion, please do not abbreviate it to EU, which can also stand for The European Union.

See also sequels, prequels, interquels and spinoffs for works that share same continuity and the same medium as the primary work (i.e. a Video Game with a prequel game, or an anime series that spins off another series).