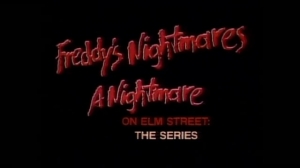 "No no no! Don't touch that dial. Here's what's on my mind tonight."
— Freddy Krueger, in the show's promos
Advertisement:

Each episode features two separate stories, usually connected by the first part's supporting character who takes the role of a protagonist in the second part.

Freddy himself appears in some episodes terrorizing another Victim of the Week. Other episodes revolve around teenagers and adults who go through quite unusual dream sequences which lead them to death or insanity.