Giving Them the Strip 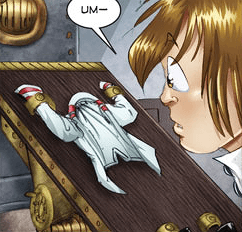 "He pushed past me into the house, then turned and grabbed me by the shoulder.
'Now then!' he said.
I disengaged myself coldly. I had to wriggle out of my pyjama jacket to do so, but I managed it."
— Bertie Wooster, Thank You, Jeeves
Advertisement:

Narrow escapes make for big thrills, and elusive heroes slipping free of the grasp of doom is a classic. Grabbed by an enemy too powerful to fight, the overmatched hero may need to sacrifice fashion or dignity — possibly even modesty — for survival's sake. When you're snagged by your coattails, remember that it's better to need a new coat than a new incarnation: You can always slip out of your sleeves, and leave your attacker with a secondhand garment as a consolation prize.note The word "escape" literally means this trope; from Vulgar Latin *excappare, literally "get out of one's cape, leave a pursuer with just one's cape"

Most commonly, this trope is employed when a hero or intended victim is grabbed by the bad guys, usually by the jacket, sleeve, or cape, and discards or destroys all or part of the outer garment to escape. Footwear can also be shed in self-defense if an attacker is trying to drag the victim off a high perch, or if the subject of this trope is wading through deep mud or quicksand for that matter. If a fleeing character's clothing becomes entangled in briars or barbed wire, baring skin may be their only means to free themselves in time, while providing a handy excuse for Fanservice. Hastily removing a garment because it's on fire, doused in acid, or trapped in the gears of some heavy machine that would otherwise crush the wearer are also variants.

Depending on how much the hero or heroine strips off to escape, this trope can be either the opposite of or synonymous with Defeat by Modesty. If discarding one's clothes isn't enough to win freedom, circumstances like these may force a Life-or-Limb Decision. Sometimes combined with the Ninja Log trick, Ankle Drag, Cape Snag, Pinned to the Wall, or Sticky Situation. See also Losing a Shoe in the Struggle, which may occur unintentionally. Battle Strip is a deliberate aversion.

Not to be confused with discarding one's garment to mislead a pursuer (Outfit Decoy or Throwing the Distraction) or removing a garment to fight someone off with it (Improvised Weapon), as these are used to avoid being grappled in the first place. Contrast with the (ominous) Empty Piles of Clothing, or the (humorous) Right Out of My Clothes. Compare with Stripping Snag, which deals with less deliberate examples of people losing articles of clothing when trying to flee, and with Bedsheet Ladder, where some instances may have the character sacrificing pieces of their clothing to complete the ladder they're using to climb to their escape. Can overlap with Defiant Strip in situations where the person has ended up naked to escape, but doesn't care that they had to sacrifice modesty for freedom.