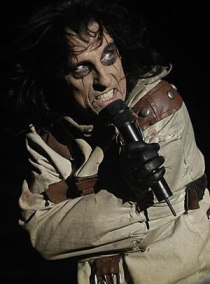 Judge: Alice Cooper, you have been accused of mass mental cruelty. How do you plead?
Alice: Guilty!
— The intro of "Lock Me Up" from Raise Your Fist And Yell
Advertisement:

A heavy metal/hard rock artist from Detroit, Michigan, Vincent Damon Furnier (born February 4, 1948) was originally the frontman of a band called Alice Cooper. He has also used it as his stage name from the start. Every Alice Cooper album credits vocals (and sometimes harmonica) to Alice Cooper. He has since legally changed his name to this. The split was entirely amicable, probably because Furnier pays royalties to his former bandmates for the right to use the name.

Cooper's career started in 1964, when his band was named The Spiders. In 1969, they renamed themselves Alice Cooper and released their debut album, Pretties for You on Frank Zappa's Straight Records label. Their first major breakthrough was in 1971 with the release of the song "I'm Eighteen" on the album Love it to Death. The song was followed up with what is considered Cooper's Signature Song, "School's Out" in 1972. In 1973, they released their most commercially successful album, Billion Dollar Babies, which reached #1 in both the US and UK. Their next album, Muscle of Love, was less successful, but still reached #10 on the Billboard Pop Albums chart. This was the last album recorded by the original Alice Cooper band. Furnier continued with a solo career (Still as Alice Cooper) and released Welcome to My Nightmare.

Cooper's career spans 45 years with 26 albums, and is often cited as one of the most influential performers in the hard rock genre. Bob Dylan even commented in a 1978 interview that he thought "Alice Cooper is an overlooked songwriter". Cooper's stage shows are known for their shock value and vaudevillian influences, of which Groucho Marx and Mae West were both fans. Starting in 2004, he began hosting a Detroit-based radio show, Nights with Alice Cooper.

As the band "Alice Cooper"

As a solo artist

This singer's works provide examples of:

Worse Than Contract With Devil

At the end of the episode of The Muppet Show with Alice Cooper, Gonzo shows up on the stage with something scarier than contract with the Devil that Alice Cooper had been trying to get others to sign: the bill for special effects!

Worse Than Contract With Devil

At the end of the episode of The Muppet Show with Alice Cooper, Gonzo shows up on the stage with something scarier than contract with the Devil that Alice Cooper had been trying to get others to sign: the bill for special effects!