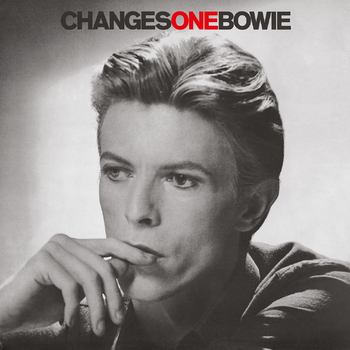 "Time may change me, but you can't trace time."
Advertisement:

Changesonebowie, released in 1976, is the first Greatest Hits Album by British rock musician David Bowie. Issued on Bowie's then-current label RCA Records, the album contains various hits spanning from Bowie's second Self-Titled Album from 1969 (better known today as Space Oddity) all the way up to his then-most recent album, Station to Station from earlier in 1976note although the 1969 self-titled album and The Man Who Sold the World from 1970 were both originally released on Philips Records and Mercury Records, Bowie had regained the rights to his masters for those two albums after leaving the labels, and handed them over to RCA when he signed onto them; RCA would legally own these albums until 1988, when their rights to them and the rest of Bowie's output up to Scary Monsters (And Super Creeps) expired. As Bowie had only just recently broken into the American mainstream with his 1975 album Young Americans, the compilation is an obstinately British-oriented one; later compilations would add in hits that managed to hit it big in the US as well as the UK.

Changesonebowie was a commercial success, peaking at No. 2 on the UK Albums chart, No. 10 on the Billboard Pop Albums chart, and No. 8 on the New Zealand Albums chart, and being certified Platinum in the United States just 5 years after its release. Changesonebowie was enough of a success for RCA to release a follow-up compilation, Changestwobowie, in 1981 that focused on songs left off of the first compilation plus newer hits from after 1976. A later compilation called Changesbowie was put out by Rykodisc in 1990 that acted as a distilled combination of both Changesonebowie and Changestwobowie with some newer hits from the EMI America Records years and a new remix of "Fame" thrown in (a 1996 reissue of Changesbowie would omit the remix in favor of the original 1975 version). Changesonebowie and Changestwobowie would be taken out of print while Ryko had the rights to the Bowie back-catalog, but would later be put back into circulation once that deal ended (with Changesbowie in turn going out of print).

I saw you troping from the stairs, you're everyone that ever cared: