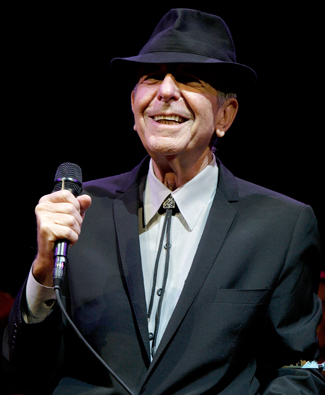 I've heard there was a secret chord
That David played, and it pleased the Lord
But you don't really care for music, do ya?
It goes like this, the fourth, the fifth
The minor fall, the major lift
The baffled king composing hallelujah
—"Hallelujah"
"I don't know. It has a good chorus."
—Leonard Cohen, on why "Hallelujah" is so popular
Advertisement:

Leonard Norman Cohen CC (September 21, 1934 – November 7, 2016) was a Canadian poet, singer and songwriter known for his wry, melancholic, and frequently beautiful lyrics, his ever-present cluster of angelic female back-up singers, his fascination with religion and spirituality, and that voice, good lord.

A native of Montreal, Cohen started his career as a writer of poetry and fiction. His first two collections received good reviews, but his later material didn't do as well, so he became a singer-songwriter due to his lack of financial success. His debut album, the snappily titled Songs of Leonard Cohen, was released in 1967; it met with critical acclaim, mediocre sales and a lasting cult status, something that could be said to hold true for the rest of his career. After a decline in popularity from the mid-1970s onward, Cohen released the incisive, satirical I'm Your Man in 1988. Widely considered one of his best albums, it effectively rebooted his career and cemented his status as a cult figure.

Something of an acquired taste due to his minimalistic approach to music, the frequently dark tone of his lyrics, and his average-to-middling ability to actually sing in tune, Cohen is nevertheless regarded as one of the finest and most influential songwriters of his time. His songs have often been covered by other artists, with "Hallelujah"—most famously covered by Jeff Buckley on Grace—being the most prominent example, and he was inducted into the Rock and Roll Hall of Fame in 2008.

Cohen was private and something of a hermit (he spent many years living in a Zen commune atop Mount Baldy, where he was known as Jikan, "The Silent One"), but after his manager, Kelley Lynch, almost completely emptied his pension account and ran away with the money, Cohen started touring again in 2008 at age 73. The event triggered a new creative period for Cohen, who would continue touring into the early 2010s, and release three new albums two years apart, starting in 2012, with Old Ideas. On October 21, 2016, he released what would turn out to be his last album, You Want it Darker, which appropriately enough had acceptance of mortality as a central theme. Three weeks later, on November 7, he passed away.

Also, Phil Spector once threatened him with a loaded gun. But that's not important.

Tropes about this musician include: