Music / Songs of Love and Hate 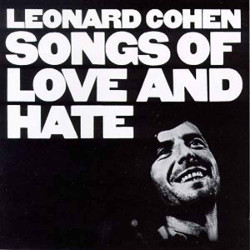 "The rain falls down on last year's man..."
"Commonly considered Cohen's grimmest representation of the squalor of the achingly impoverished and incomprehensibly surreal marginalisation of the contemporary individual, "Dress Rehearsal Rag" is, no doubt, music to eat a gun by."
— Judith Fitzgerald

Songs of Love and Hate is the third album from Leonard Cohen. It is considered by many to be his masterpiece. It is also the darkest and most introspective of all his albums and was the product of a very bleak time in his life when he wrestled with depression, suicidal feelings and drug abuse. Thematically it is the most coherent; eight songs that echo and contrast with each other with imagery in binary pairs: love and hate but also hot and cold, summer and winter, morning and afternoon, clothed and unclothed.

Like its predecessor this album was recorded and produced in Nashville by Bob Johnston, with the exception of "Sing Another Song, Boys" which was recorded live at the 1970 Isle of Wight Festival.

Tropes of Love and Hate: