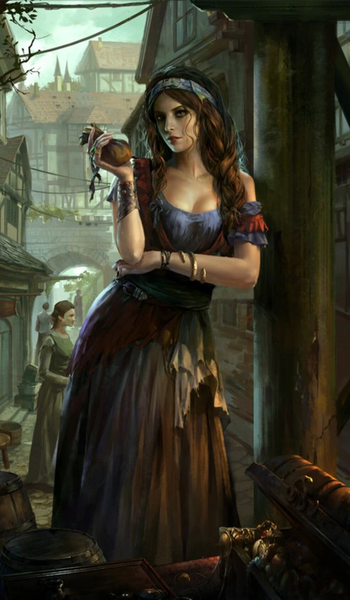 The stereotype of the Romani as dishonest has been so prevalent that exonyms like "gypsy" and "Zigeuner" connote it. Examples mainly include but are not limited to theft, fraud, and kidnapping of children.

Older Than Steam, the stereotype goes back centuries and is especially common in older works. To a lesser extent, it is also associated with other nomadic groups such as Irish Travellers even if they're unrelated to the Romani.

For once, this stereotype actually originates from an actual facet of Romani culture, albeit a completely innocent one in actuality. Namely that they originally only considered something to be personal property for as long as it remained on one's person. Keep in mind that this is no longer the case with actual Romani people, however.

Note also that the word "gypsy", though commonly used in a lot of media, and accepted by some Romani, is considered by others as an ethnic slur.