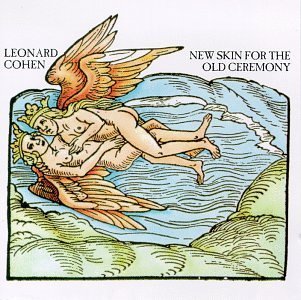 "We are ugly but we have the music"
"Like Graham Greene and Ingmar Bergman, Cohen is concerned with the inevitability of tragedy. He is awesomely open to mythic heroism, to the mystique of love, but in the end he believes, as did Ernest Hemingway, that there are no happy endings between men and women, that the only glory is in the attempt. "Their vows are difficult/They're for each other," says the artist in "Why Don't You Try". The listener may be advised to do the same."
—Paul Nelson

New Skin for the Old Ceremony, Leonard Cohen's fourth album released in 1974. marks a new stage in Cohen's career. On this album, with a new producer in John Lissauer, he breaks away from the spare, guitar-driven folk-poetry of his first four albums and begins to experiment with a more orchestrated, more upbeat sound. This was a shock for many of his followers; following a characteristic pattern for Cohen's work it failed to trouble the album charts either in the US or his native Canada but also it was only a modest success in Britain. Unlike any of its predecessors it failed to make the top 20 albums. Few would count it as one of his greatest works and it marks the beginning of a lean period for him but it contains seeds which will be cultivated more fruitfully in later years and time has been kind to it.

Why Don't You Trope?: