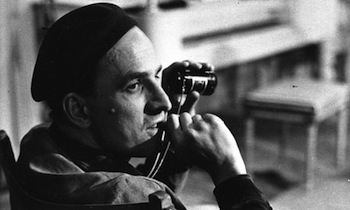 "Film as dream, film as music. No art passes our conscience in the way film does, and goes directly to our feelings, deep down into the dark rooms of our souls."
Advertisement:

Ernst Ingmar Bergman (14 July 1918 – 30 July 2007) was a Swedish director, regarded as one of the true greats in the history of film. Between writing, directing, and producing, he was nominated for thirteen Academy Awards, winning for Best Foreign Film three times: The Virgin Spring (1960, the inspiration for the American The Last House on the Left), Through a Glass Darkly (1961), and Fanny and Alexander (1983). Another of his famous films is The Seventh Seal, a Trope Codifier for Chess with Death.

His films have a reputation for being gloomy and surrealistic. Although he generally tells identifiable "stories," straightforward plot descriptions will rarely give any real indication of what his movies are "about": even criticism of his works tends to sound like psychobabble. Bergman himself even stated that he didn't so much care if the audience understood what he was going for, as long as they felt something. Despite being (rather unjustly) a poster child for True Art Is Incomprehensible, the list of filmmakers who regard him as being among the best directors ever is long, including Woody Allen, Stanley Kubrick, Martin Scorsese, Steven Spielberg, Ang Lee and Francis Ford Coppola. There's a reason forty of his filmsnote forty-one, if you count Torment, for which he wrote the screenplay have been released in America by The Criterion Collection.

However, it should be noted that in his lifetime, Bergman was pretty much a household name in The '60s and The '70s across the world. His films were generally box-office successes, not only in Sweden and Europe, but also in America. His film Scenes from a Marriage was the most popular TV show of its age, and according to legend was a cause for a spike in divorce rates after the film's release. Cries and Whispers was likewise released in America by none other than Roger Corman, who managed to distribute it so well that it became a box-office success there.

Not to be confused with, nor any relation to another Swedish famous film persona, Ingrid Bergman (though he once directed her, in Autumn Sonata; people on set got them confused).

Works by Ingmar Bergman with their own trope pages include: