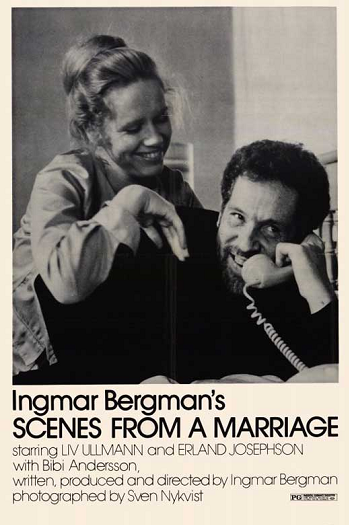 "Do you think that secretly we're afraid we're slipping downhill and just don't know what to do?"
— Marianne
Advertisement:

Scenes from a Marriage (Swedish title Scener ur ett äktenskap) is a 1973 TV series and film by Ingmar Bergman. Liv Ullmann and Erland Josephson star. Initially a six-episode miniseries, it was recut into a theatrical film that was broadcast internationally.

Two main characters, Marianne and Johan, are a married couple who have a very eventful, somewhat troubled married life. At first they are happy but later the hubris of the everyday life take their toll on them. Whether they will be able to stay together is a hard question.

The story would receive a sequel, Saraband, thirty years later, with Ullman and Josephson reprising their roles. It also got an American remake with the same title in 2021.

Alternative Title(s): Scenes From A Marriage