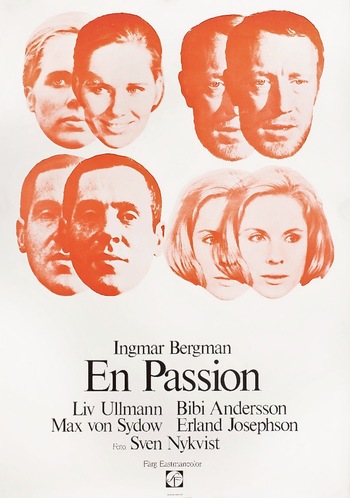 En Passion (The Passion of Anna in English) is a 1969 film directed by Ingmar Bergman, starring Liv Ullmann and Max von Sydow in the lead roles and fellow Bergman regulars Bibi Andersson and Erland Josephson in supporting roles. It serves as a sort of pseudo-sequel to/spinoff from Bergman's previous film, Skammen, which gets new context depending on how the audience reads a key scene in this film. This being Bergman, there's a lot left to interpretation.

The main character is Andreas, a former geologist living in self-imposed exile on a small Swedish island. After she asks to use his phone, he meets the mysterious Anna, a fellow islander mourning the recent death of her husband and son in an automobile accident. The two embark on a tentative romance, although their respective mysterious pasts prove disastrous to the relationship. Andreas also occasionally interacts with his middle class neighbours, architect Elis and his wife Eva (with whom Andreas has a brief affair). Against the backdrop of the quartet's complicated love lives, someone— or something— begins brutally killing livestock on the island, throwing the entire community into an air of suspicion and paranoia. In between it all, the film occasionally breaks the fourth wall for the actors to offer their own interpretations of what's happening in the movie and their character motivations. Again- it's Bergman.

This film is the third in a row where Liv Ullmann and von Sydow play an onscreen couple after Hour of the Wolf and Skammen. It is often incorrectly identified as Bergman's first color film, a title that actually belongs to All These Women, made five years earlier. The fact that Bergman himself says he "doesn't count" All These Women only further muddies the waters.