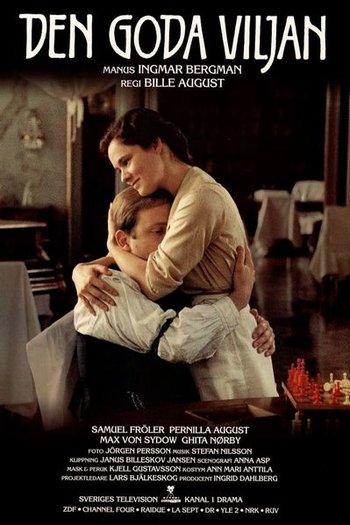 The Best Intentions is a 1992 film from Sweden, directed by Bille August, with a screenplay by Ingmar Bergman.

Bergman, who retired from directing films after Fanny and Alexander in 1982 but still wrote for film and television, wrote the screenplay about the early years in the marriage of his parents, although he changed their first names from Erik and Karin to Henrik and Anna, possibly to justify Artistic License. (He didn't change their family names of Bergman and Åkerblom respectively.) Henrik Bergman is a penniless divinity student who is invited for dinner at the ultra-rich home of the Åkerblom family. Despite the fact that he's engaged to a sexy waitress named Frida, he falls for Anna, the vivacious young Åkerblom daughter. Anna falls in love with Henrik as well, but her domineering mother Karin, disapproving of Anna's romance with a poor divinity student who has another girlfriend, forcefully intervenes to put an end to the relationship.

Eventually, however, Anna and Henrik find their way back to each other and get married. Henrik gets ordained into the Lutheran Church and gets a job as a minister in the remote northern village of Forsboda. Anna, a child of privilege and a city girl, is not too thrilled about living in a remote countryside village but makes the best of it. Time passes and they have a son, Ingmar Bergman's older brother Dag

. Their marriage is stressed when Henrik declines a plum posting to a hospital in Stockholm sponsored by Queen Victoria (this

Queen Victoria) herself, and stressed further still when they become foster parents to a creepy orphan boy named Petrus.

Max von Sydow has a small role as Anna's father Johan. Pernilla August, who stars as Anna, later played Shmi Skywalker in the first two Star Wars prequels, The Phantom Menace and Attack of the Clones.

The Best Intentions was released as a six-hour series for Swedish television and a three-hour theatrical cut for international release. This trope page is based on the theatrical version. Ingmar Bergman continued to chronicle his parents' marriage with the screenplays to films Sunday's Children and Private Confessions.