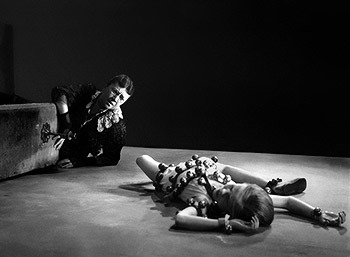 "They speak in the way only the French can, as if it's not enough for a concept to be difficult, it must be utterly incomprehensible."
— Roger Ebert on Anatomy of Hell
Advertisement:

A Show Within a Show is sometimes the stereotypical artistic independent movie, the kind which practically requires a didactic analysis to convince people that, though it does not aim to entertain the Lowest Common Denominator in any way, it's a profoundly meaningful work of True Art. If one of the main characters makes one, expect Creator Breakdown. These films are likely to have several, if not all, of these elements:

In the best cases, usage of this trope is an Affectionate Parody or a sharp Take That! to a particular work, director or movement. In other examples, though, it's quite obvious that the writers didn't know what they were referencing.

It's often the goal of the Prima Donna Director.

It has to be said, however that this trope applies heavily to people with Small Reference Pools. For instance, although Ingmar Bergman is regarded as an "arty" director, in his lifetime his films were consistent box-office hits as were some of Federico Fellini's and Akira Kurosawa's films along with French New Wave films from François Truffaut, Jean-Luc Godard, etc. Also, there are cultural differences which mean that high concepts, artistic influences and education levels may make some audiences have larger reference pools than others, though there is plenty of debate over which is which. Put simply, what's obscure to some is commonplace in other places and vice versa (which doesn't mean Viewers Are Morons or Viewers Are Geniuses unless you're a True Art snob or Anti-Intellectualism slob).note It is important to emphasize this, since there are many countries that use this trope as a legal loophole to limit the distribution of films with controversial subject matter in a market or to avoid complying with other local legal requirements such as taxes or adding a dub if the local distributor lacks the budget to include one, especially in countries when dubbing is mandatory by law. This is painfully common for non-western movies or from Eastern European countries, through there are rare cases when this trope also happens with mainstream Hollywood films, especially in markets with a love-hate relationship with the western culture, like the Sinosphere (China, South Korea, Japan, Vietnam, etc.)

Please note that only Show Within a Show examples are objective. Applying this trope to a real work can be considered quite YMMV.

See Euroshlock, an index of movies of the kind which this trope is riffing on.

Jay Sherman screens a student film he made to friends and family, which doesn't go over well.

Jay Sherman screens a student film he made to friends and family, which doesn't go over well.