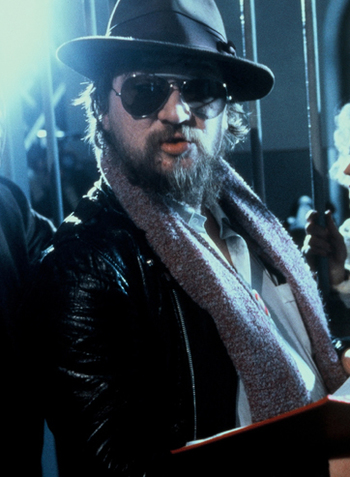 On the set of Berlin Alexanderplatz.
"What I would like is to make Hollywood movies, that is, movies as wonderful and universal, but at the same time not as hypocritical."
Advertisement:

Rainer Werner Fassbinder (31 May 1945 – 10 June 1982) has a name that rolls off your tongue, and can be recognized as so obviously German from the Moon. Fassbinder was to the movies what Punk Rock was to music. His films were a deliberate reaction against the French New Wave which weren't always cheery but generally tended to be light and filled with some amount of hope. Fassbinder's films of the 70s and early 80s, were set in a Crapsack World of middle-class malaise, working-class flophouses with the powerful always exploiting the weak, and the weak letting themselves be exploited. His was a very bleak worldview with very few moments of tenderness. That said, because they are so highly qualified, the tenderness in his movies, like in his idol, Bertolt Brecht, radiates with true sincerity.

The main cinematic influences of Fassbinder include Josef von Sternberg, Max Ophuls, Michael Curtiz (albeit not for Casablanca so much as for his Joan Crawford vehicles), Luchino Visconti, Agnès Varda, Luis Buñuel, Claude Chabrol and Jean-Luc Godard. He also said many times that he wanted to be for German cinema what Federico Fellini and Ingmar Bergman were for their own national cinemas. His most famous influence was Douglas Sirk, whose career and reputation Fassbinder played a major role in reviving. Fassbinder didn't see Sirk's films until a retrospective of his works in 1969-1970. This was the only year in which Fassbinder didn't make films, and after that, he inaugurated his famous art-house take on the Hollywood melodrama that in time influenced the likes of Pedro Almodóvar and Todd Haynes among others.

Fassbinder died before he turned 40, but is the textbook definition of Short-Lived, Big Impact, in a career of 15 years, Fassbinder left behind 40 films, several theater productions and four miniseries including an epic 14 episode adaptation of Berlin Alexanderplatz that is one of the most complex and beautiful achievements ever achieved for Television. His filmography is vast, varying in style and frequently undergoing Genre Shift. His films had a Myth Arc which he admitted was deliberate, the history of Germany since the end of World War II. He himself was born three weeks after the surrender of Nazi Germany. A running theme in his works, which made him highly controversial in Germany, was that he felt that the post-war Germany wasn't so different from their predecessors. His films gleefully explored the All Germans Are Nazis trope from every side, deconstructing and reconstructing it all the time, stating that the Germans of the post-war generation never truly took responsibility for Nazism and that it fell on his generation to explore the Old Shame.

He was the definition of Enfant Terrible in Germany, taking an outsider identity as a gay artist and surrounding himself and casting in his movies other outsiders like prostitutes, male and female, as well as transsexuals. His film Fox and His Friends is one of the first to show gay culture as it is, from the inside, with Fassbinder himself playing the lead role. He was also considered a Prima Donna Director on the set, described by some as The Caligula for the pressures and abuses he put on his cast and crew, who nonetheless showed a great deal of loyalty to Fassbinder and continued working with him. Fassbinder's collaborations with actresses Hanna Schygulla and Barbara Sukowa helped make them stars. His hard-drinking and hard-partying lifestyle caught up with him and he died of a drug overdose during the editing of what turned out to be his last film, an adaptation of Jean Genet's Querelle de Brest.