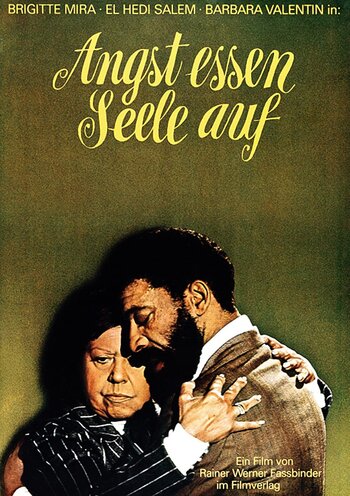 Emmi (Brigitte Mira) is a dowdy cleaning lady well into her sixties. One day, when it's raining particularly hard while she's walking home from work, she ducks into a bar to stay dry. The bar caters to African and Middle Eastern immigrants. One of those immigrants is Ali (El Hedi ben Salem), a tall, handsome, taciturn man from Morocco who immigrated to Germany looking for work. Ali rather surprisingly overlooks the two very attractive women in the bar (one of whom is the bartender) and asks Emmi to dance. Then he offers to escort her home. Then they sleep together.

Soon they are married, despite the fact that Ali is barely half Emmi's age. Unfortunately this tender romance is spoiled by the virulent racism and intolerance of Emmi's family and all her neighbors and friends. German hatred for black people and for Muslims, the latter being at a fever pitch after the terrorist attack at the 1972 Munich Olympics, threatens to break the couple up.