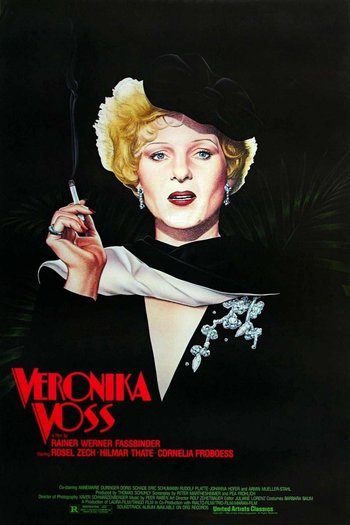 Veronika Voss is a 1982 film by Rainer Werner Fassbinder.

It's set in Munich in 1955. Robert Krohn, a sports reporter with a Munich newspaper, meets a woman in the rain outside a movie theater. Her name is Veronika Voss, and the film they just watched was one of her old movies. Voss was a big star in German cinema during the Nazi Germany era, but after the war she struggled to find work. It gets worse than that: Veronika is addicted to morphine, and is in the clutches of her Dr. Feelgood, evil neurologist Dr. Marianne Katz. Katz has a scam in which she gets rich people hooked on morphine and then bleeds them of their assets. Veronika, in fact, has signed over her mansion and everything else she owns to Dr. Katz.

Robert has a girlfriend—Henriette, a photographer at the paper—but he's enchanted by the alluring Veronika and they become lovers. Robert tries to help Veronika escape from Dr. Katz's clutches and start a new film career, but the good doctor isn't going to back down easily.

Fassbender's next-to-last film and the last film in his "BRD Trilogy" of movies about life in West Germany in the years after the war, following The Marriage of Maria Braun and Lola.