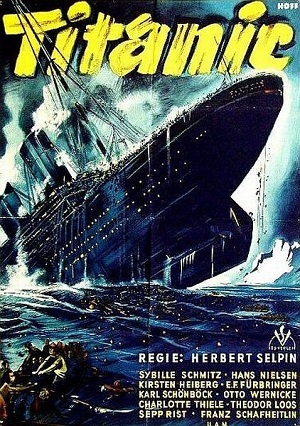 Titanic (1943) is, as the name implies, an adaptation of the Real Life story of the RMS Titanic, which sank in the early-morning hours of April 15, 1912, at the cost of some 1,500 lives. What makes this version unique is that it was a German production made by Those Wacky Nazis, right in the middle of World War II, as a piece of anti-British propaganda. In this version, White Star Line president Bruce Ismay is pushing Captain Smith to sail at unsafe speeds because Ismay wants the Titanic to win the Blue Ribbon award for the fastest Atlantic crossing. This will push up the price of White Star stock and help Ismay, who is deep in debt, fend off a hostile takeover from John Jacob Astor. Capt. Smith ignores both the ice warnings and the advice of his honest, brave, and entirely fictional German First Officer Petersen, and the Titanic sails to its doom.

The backstory behind the production of this film is almost as unfortunate as the real story of the Titanic. Frustrated with the massive production troubles — namely the drunken, rapey German troops who were serving as extras — director Herbert Selpin complained a little too much and wound up getting arrested by the Gestapo. Werner Klingler finished the film, while Selpin was found hanged in a prison cell, probably murdered. The film itself had some brief theatrical runs around Nazi-occupied Europe but was banned in Germany itself, after Goebbels decided that scenes of people running around in panic would not be good in a Germany that was being punished by Allied bombing. The ship used for filming, the SS Cap Arcona, was sunk by Allied bombers on May 3, 1945, while transporting German concentration camp prisoners. About 5,000 prisoners died, over three times the loss of life in the sinking of the Titanic.

The heavy-handed, crude propaganda keeps this from being a very good movie, but it is of historical interest for anyone studying Nazi cinema or cinematic portrayals of the Titanic disaster, and has proven to be surprisingly influential on future Titanic films. A few brief clips from this film were used as stock footage in the vastly superior A Night to Remember. James Cameron has never admitted taking any inspiration from this movie, but some of the plot points in his Titanic (1997) —suspected theft of a blue diamond, an innocent man being locked in the master-at-arms' cabin, where he sees water flooding in before he's liberated by his comrade with the aid of an emergency axe; a woman headed for an Arranged Marriage who rejects that idea after falling in love on the ship; a First Class couple arguing in their cabin over the woman's alleged infidelity before being interrupted by a steward informing them to put on lifebelts; an arrogant first class passenger trying (and failing) to bribe his way onto a lifeboat; and a scene where the female lead is forced by the hero to board the last lifeboat, where she dramatically watches her lover disappear behind the railing as the lifeboat is lowered— resemble moments in this film. Additionally, this film's concept of interweaving fictional stories of passengers with the true story of the sinking and designating J. Bruce Ismay as the villain solely responsible for the disaster have been repeated in many subsequent dramatizations of the sinking.