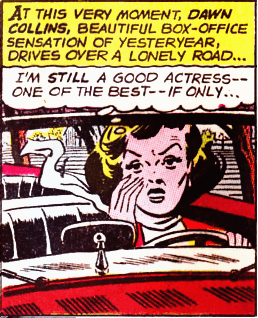 "Her name is Lola, she was a showgirl
But that was thirty years ago, when they used to have a show
Now it's a disco, but not for Lola
Still in the dress she used to wear, faded feathers in her hair
She sits there so refined, and drinks herself half-blind
She lost her youth and she lost her Tony,
Now she's lost her mind!"
— Barry Manilow, "Copacabana (At the Copa)"
Advertisement:

She was one of the most famous performers of her time. But now, her days in the spotlight are long gone. She's over the hill. A joke. A "Where Are They Now?" trivia question. A White Dwarf Starlet: like stars in outer space that have ceased to burn and are now glowing only with residual heat from their active years.

But she still yearns for the adoration she received during her time as the It-Girl and believes her big comeback will happen any day now. She tends to live in a run-down mansion full of memorabilia of her lost golden years, wears moth-eaten Outdated Outfits from her great hits, and still expects everyone to recognize her. She refuses to believe she's too old to play Ophelia, and still insists she's not old enough for Gertrude.

This character is nearly Always Female, for some reason. Maybe it's because a woman in this position is more likely to draw sympathy than a man, or maybe it's because this fate befalls women a lot more in real life than it does men. Many women find it difficult to get work in the entertainment industry once their beauty fades and they're overlooked in favor of the latest pretty young thing, whereas a male performer can find gigs for as long as he can remember his lines, even if he burns out, loses his looks to the ravages of time, and/or becomes a parody of himself.

Like actual stars of the outer space, sometimes the White Dwarf Starlet can go nova - burst in new brightness, if the character indeed does manage to get a role in a hit movie, TV show, or play (even a minor role that's well remembered), or releases a comeback album.

Compare with Former Child Star. See also I Was Quite a Looker. Related to Hollywood Old.

Has absolutely nothing to do with the magazine published by Games Workshop, or with the ’90s made-for-television SF movie.