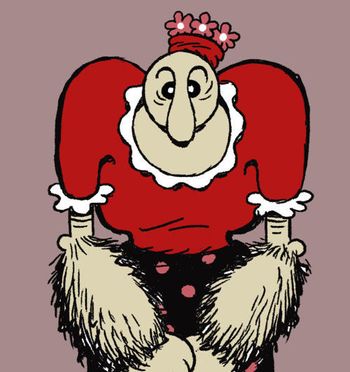 No one will confuse her for a man if she wears the proper clothing and accessories.
"...an immensely fat old lady wearing an elaborate ginger wig and a brilliant pink set of robes that flowed all around her, giving her the look of a melting iced cake. She was looking into a small jewelled mirror and dabbing rouge onto her already scarlet cheeks with a large powder puff, while the tiniest and oldest house-elf Harry had ever seen laced her fleshy feet into tight satin slippers."
— Harry Potter and the Half-Blood Prince
Advertisement:

The gonky femme is a woman that looks far manlier than the sweet, girly character she actually is. She enjoys make up, boys bands, ponies, wears pink dresses, and so on, making her more like a Girly Girl with a Tomboy Streak rather than a Tomboy with a Girly Streak.

She may be too bulky and mannish, or very tall and hideous, but no matter how designed, she is decidedly unfeminine. More often than not she has a muscular build or an excess of fat and her face breaks the standard female design, even sometimes having non-human features. In some cartoonier shows she can be so ugly that she breaks the medium's art style.

Her femininity can take many forms. She can be motherly and nurturing, with mostly domestic skills and interests, or a seductive and charming woman, or weak and susceptible, vain and superficial, or energetic and bubbling. As long as she acts feminine but looks otherwise, she is this trope.

Some of these characters, however, can be physically strong and even aggressive when annoyed, but tend to act girly most of the time.

Because of their masculine appearance, their gender is mostly evident by Tertiary Sexual Characteristics. It also may raise some Viewer Gender Confusion. This trope is a staple of many caricatures of trans women, in which case the femininity is often of a particularly garish and over-the-top sort—that is, when they're not going for an Unsettling Gender Reveal subtle enough to initially fool the audience along with other characters.

If the girl is tall — and she usually is — she may overlap with Huge School Girl or Gentle Giant. See also Lady Looks Like a Dude when the character definitely looks like a man. Compare with Butter Face where only the face is "scary, ugly and even masculine" but the body is feminine. Contrast against Brawn Hilda, where a girl does not only look mannish, but acts just like that.