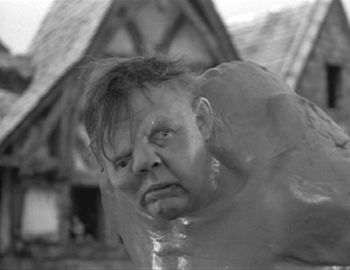 Poor, poor Quasimodo…
"You are deformed. And you are ugly. And these are crimes for which the world shows little pity."
— Judge Claude Frollo to Quasimodo, The Hunchback of Notre Dame (Disney)
Advertisement:

A character that induces both fear and pity in viewers because his deformities belie a perfectly normal — if not noble — personality. The pathos associated with The Grotesque is the implication that he could easily have been a well-adjusted member of society if not for the hideousness that he is powerless to remedy.

He is very rarely presented as the villain and frequently overlaps with the Reluctant Monster and Tragic Hero. The defining trait of The Grotesque is that his hideous appearance belies a gentle personality that is doomed to mistreatment because of society's shallowness. We, the viewers, are left feeling like the only ones who can see him for who he truly is, and want to comfort him with the knowledge that he's not alone in his quiet suffering.

The Grotesque does not necessarily have to be physically deformed; he can be mentally or socially deformed, so long as we continue to see the good within and wish that it can somehow overcome the badness masking it.

Don't expect any of that to allow someone this ugly to get a happy ending. Grotesques are universally tragic characters.

Contrast Red Right Hand, where the outer deformity is symbolic of an inner corruption. Not to be confused with the kind of "grotesque" that adorns old gothic rooftops — see Our Gargoyles Rock. Compare Gentle Giant (where a person is seemingly intimidating due to their size even though they're really sweet), Misunderstood Loner with a Heart of Gold (where the Loners Are Freaks stigma kicks in but they're actually not so bad once you get to know them), and Face of a Thug (Like Gentle Giant but it's their face instead). May result from a Power-Upgrading Deformation.

Not to be confused with mindless violence film Grotesque.

In his debut vignette, Mankind talks about God, his deformities and how he is a reflection of humanity's cruelty.

In his debut vignette, Mankind talks about God, his deformities and how he is a reflection of humanity's cruelty.