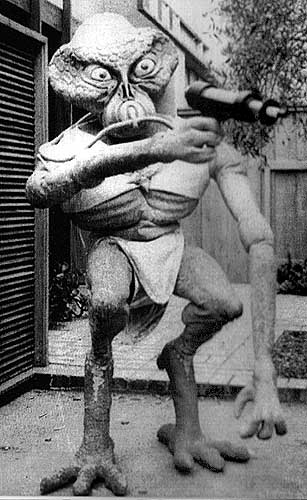 The "Thetan", seen more clearly in this publicity photo than the actual episode. 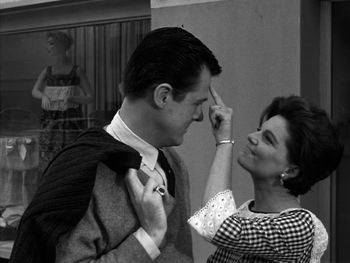 Yvette gives Allan the "mark against evil".
The Control Voice: Is this the day? Is this the beginning of the end? There is no time to wonder. No time to ask why is it happening, why is it finally happening. There is time only for fear, for the piercing pain of panic. Do we pray? Or do we merely run now and pray later? Will there be a later? Or is this the day?

The world has entered a Cold War-esque setting in which nuclear holocaust appears imminent. In the hope of staving off an apocalyptic military confrontation between nations, an idealistic group of scientists working at United Labs plans to stage a fake Alien Invasion of Earth in an effort to unite all humanity against a perceived, common enemy. The scientists have managed to study the planetary conditions on the planet Theta. They draw lots, and physicist Dr. Allen Leighton (Robert Culp) is chosen to undergo radical surgical procedures that will transform him into a projected figure from a planet with a different atmosphere. Leighton's death is faked, and the bizarre series of transplants and modifications to his body proceed. His wife, Yvette (Geraldine Brooks), persists in not believing he is dead; she feels sympathetic pain as Allen suffers on the operating table. Complications arise when the effects of Leighton's transformation extend beyond his physical appearance and begin to affect his mind, a situation compounded by the scientist's strong psychic link to his pregnant wife.

The scientists' plan is for Dr. Leighton, as the Thetan creature equipped with an energy weapon and spaceship, to land at the United Nations in an effort to create initial panic. This panic, in theory, will be resolved as the world unites to fight the invader. Leighton, now a perfect simulation of an inhabitant of the planet Theta, is launched into orbit as a weather satellite but the mission goes awry when the spaceship comes down off course and lands in a wooded area near the United Labs facility. After disintegrating their station wagon with his laser pistol, Allen is severely wounded by three duck hunters armed with shotguns as he emerges from the underbrush. In a futile attempt to possibly heal his wounds, Allen stumbles back to the lab. Yvette again feels his pain and hurries to the lab looking for her husband. She arrives as the Thetan enters and collapses to the floor. Before dying of mortal wounds, the creature demonstrates "the mark against evil", a personal gesture - touching a finger to the lips, and then to the forehead - which they once shared, and Yvette then realizes the horrifying truth that the alien is, in fact, her husband.

The Control Voice: Scarecrows and magic and other fatal fears do not bring people closer together. There is no magic substitute for soft caring and hard work, for self-respect and mutual love. If we can learn this from the mistake these frightened men made, then their mistake will not have been merely grotesque, it would at least have been a lesson. A lesson, at last, to be learned.

The Architects of Tropes: