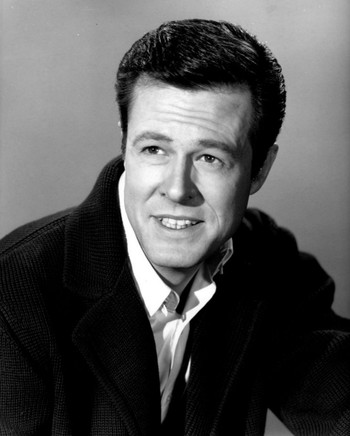 Born in Oakland, California, Culp's childhood ambition was to be a cartoonist, and he was quite adept at it as a teenager, but eventually was bitten by the acting bug and, as soon as he was old enough, headed to New York City, where he first acted in off-Broadway plays. Eventually, he returned to California, where he appeared for several years in anthology series, including Alfred Hitchcock Presents and Zane Grey Theater.

Culp later found out that all of the Zane Grey Theater episodes were meant to serve as pilots for Western series, and indeed, it was the first one he did, "Badge of Honor", that wound up going to series. In the Fall of 1957, Culp debuted in the series Trackdown, playing Texas Ranger Hoby Gilman, who also served as de facto Sheriff of his hometown of Porter, Texas when he wasn't on Ranger business. The series remains the only series to gain the official blessing of the real Texas Rangers organization, but sadly, was remembered for quite some time only for spinning off Wanted: Dead or Alive, which launched the career of Steve McQueen. It's only been in recent years that Trackdown has gotten some long overdue respect, thanks to being aired on MeTV and its sister network, Heroes & Icons. Additionally, the series also gained a bit of notoriety during the late 2010s for the episode "The End of the World", in which Hoby took on a Con Artist named Trump (no relation) who sold parasols to protect gullible citizens from a solar event and also threatened to sue Hoby for slander!

Trackdown lasted for two seasons and established Culp as an actor, but he almost quit acting after the show, due to the series' producer, a "vicious drunk" as Culp referred to him (in the intro to the I Spy book, sadly the closest thing we'll ever see to an autobiography) who spread vicious rumors about the actor. Culp almost quit acting to do scriptwriting; he'd already written a Trackdown script, and would go on to write a two-part episode of The Rifleman entitled "Waste" that many of that show's fans consider the its best episode, as well as "The Swinger", an episode of Cain's Hundred. Fortunately, he stuck with acting, appearing on every classic Western series of the period, in addition to forgotten ones like Tate and Johnny Ringo, as well as other series like Naked City, Ben Casey and Dr. Kildare, and turning up in movies like PT 109 and Sunday In New York. However, he gained his greatest acclaim in that period for his appearances on The Outer Limits (1963). Culp starred in three episodes of that classic sci-fi series: "The Architects of Fear", "Corpus Earthling", and the Hugo Award-winning "Demon With a Glass Hand".

He soon was cast in his most famous series, the light-hearted NBC spy drama, I Spy. Producer Sheldon Leonard actually cast Culp's co-star, comedian Bill Cosby, before casting Culp, and was reluctant to cast Bob after hearing that the actor could be "difficult". Nevertheless, the actor was cast in the lead role of Kelly Robinson.

I Spy had a couple of advantages going for it. One was the light-hearted banter between the two leads, many of it ad-libbed. The other was the fact that episodes were actually shot on location. The producers wisely became friendly with the crew from NBC News, who allowed them to travel along. This meant that if you were watching an episode set in Rome, for example, you were seeing the real city of Rome and not the Desilu Studios backlot (meaning that there was no "Somewhere In (Insert Foreign Country Here)" cheating on this show, like The Man from U.N.C.L.E. infamously did). Culp also resumed his writing career with scripts for the series. Leonard was not particularly happy that an episode written by Culp, "So Long, Patrick Henry", was selected for the series' debut episode in September of 1965. He wrote several other scripts for the series and also directed one, "Court of the Lion", but when Leonard saw how worn-out directing had made him, ordered Culp not to direct any more episodes, saying that he'd rather have a live actor than a dead director.

I Spy ran for three seasons, and both actors were nominated each year for Best Actor in a Drama Series three years in a row. Cosby won all three years, but Culp couldn't have been too unhappy...he took great pride in the fact that he taught Bill how to act. Near the end of the series, Get Smart did a parody episode, "Die, Spy", which teamed Max with a black agent played by Stu Gilliam. Culp had a hilarious cameo in the episode as a Turkish waiter (one of the few times on Get Smart that an actor appeared in a parody of his or her show).

After I Spy ended, Culp embarked on a movie career, landing a major hit with the sex comedy Bob & Carol & Ted & Alice in 1969. His next TV venture was a pair of episodes of The Name of the Game. Universal fired one of the series' stars, Tony Franciosa, shortly into the third and final season, and decided to bring in guest actors to replace Franciosa and his character, Jeff Dillon. Culp played reporter Paul Tyler for two episodes, "Little Bear Died Running" and "Cynthia Is Alive and Well and Living in Avalon".

In the Fall of 1971, Culp made the first of his three guest appearances on Columbo, as the murderous head of a private detective agency in "Death Lends a Hand". He would go on to play killers in episodes in the next two seasons as well, establishing himself as one of the series' best villains, along with other "frequent flier" on the series like Jack Cassidy and Patrick McGoohan. Each character he played on Columbo struck the right notes of cocky and arrogant.

He continued to maintain a movie career around this period as well, though none of his films set the box office on fire. Among Culp's movies was the 1972 private detective drama Hickey and Boggs, which reunited him with Bill Cosby. TV-movies were a staple of his career as well, and he appeared in memorable ones like Outrage, A Cold Night's Death and Houston, We've Got a Problem.

In 1981, Culp returned to series television with The Greatest American Hero, which cast him as FBI Agent Bill Maxwell, who, through a series of odd events, struck up an odd alliance with Ralph Hinkley (William Katt), a high-school teacher who was given a superhero suit and superhero powers by aliens that the duo met in the desert. Bill called on Ralph to "put on the red jammies" and help him with whatever case he was working on, and Ralph, having no concept of how to harness his powers, would stumble and bumble, but they'd still wind up saving the day. Katt and Culp initially did not get along, but the two learned to tolerate each other and eventually became friends. The series ran for two seasons. Culp also got to utilize his writing and directing skills for a pair of episodes, "Lilacs, Mr. Maxwell" and "Vanity, Says the Preacher".

After The Greatest American Hero wrapped, it was back to TV-movies and guest shots for the actor. Culp appeared on Hardcastle and McCormick, Hotel (1983), Murder, She Wrote, Matlock, Jake and the Fatman and The Golden Girls during the remainder of the 1980's, and also appeared in TV-movies like The Calendar Girl Murders and The Blue Lightning. He also reunited with Bill Cosby for an episode of The Cosby Show, in which he played Scott Kelly (a play on the names of their I Spy characters).

As the 1990s rolled around, Culp comfortably set into guest-star roles on various series: Columbo (playing the father of one of the killers in an episode of the revived series), The Nanny, Walker, Texas Ranger, Burke's Law and Lois & Clark, to name a few, as well as occasional feature films like Spy Hard and Most Wanted. Eventually, he would become famous to a new generation, in the recurring role of Ray Romano's father-in-law on Everybody Loves Raymond. Gamers could also hear his voice as Dr. Wallace Breen in Half-Life 2. For fans of I Spy, Culp served them as well, appearing in a cameo in the short-lived series Spy Game, an episode of Diagnosis: Murder entitled "Discards" (in which he appeared with other iconic TV spy actors Robert Vaughn, Patrick Macnee and Barbara Bain), an episode of Cosby entitled "My Spy", in which Cosby's character, Hilton Lucas, watches an episode of I Spy and has a dream where he becomes Culp's partner in spying, and in 1994, the inevitable reunion movie I Spy Returns, in which they have to save their grown children (played by George Newbern and Salli Richardson-Whitfield), who have followed in their fathers' footsteps as spies and gotten in over their heads.

Robert Culp died unexpectedly on March 23, 2010, when he collapsed while taking a walk not far from his Los Angeles home. Although it was initially reported that he died when he fell and hit his head on the sidewalk, the official cause of death was ruled as a heart attack. He was 79 years old.

Other projects with TV Tropes pages: