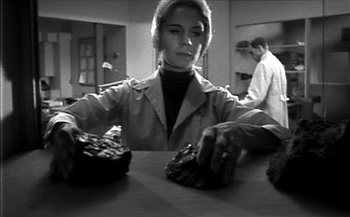 Laurie with the alien "rocks". 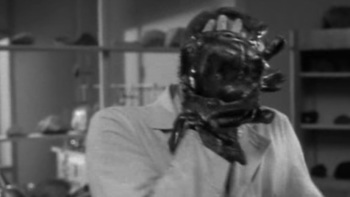 One of the parasites possesses Dr. Temple.
The Control Voice: Rocks. Silent, inanimate objects torn from the Earth's ancient crust. Yielding up to man over the long centuries all that is known of the planet on which we live withholding from man forever their veiled secrets of the nature of matter and cosmic catastrophe, the secrets of other worlds in the vastness of the universe, of other forms of life, of strange organisms beyond the imagination of man....

Alien invaders pose as rocks in a geologist's lab and discuss their plans for invasion. However, Paul Cameron (Robert Culp) is able to hear them thanks to a metal plate engraved into his skull.

The Control Voice: Two black crystalline rocks. Unclassifiable. Objects on the border between the living and the nonliving. A reminder of the thin line that separates the animate from the inanimate. Something to ponder on. Something to stay the hand when it reaches out innocently for the whitened pebble, the veined stone, the dead, unmoving rocks of our planet.