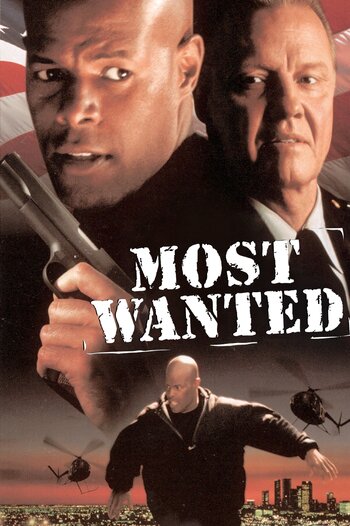 Most Wanted is a 1997 action thriller film written by, produced by and starring Keenan Ivory Wayans and an All-Star Cast comprising Jon Voight, Paul Sorvino, Eric Roberts and Jill Hennessy. Wayans portrays James Anthony Dunn, a Marine Force Recon sniper on death row who is rescued by a black ops group and tasked with assassinating a traitorous Corrupt Corporate Executive. However, the assassination must take place while said executive is escorting the First Lady of the United States on a visit to a Veterans Hospital in LA. While Dunn is lining up his shot, someone assasinates the First Lady - and then sets Dunn up to be the fall guy.

However, a young radiologist at the VA hospital, Dr. Victoria Constantini (played by Jill Hennessy) was videotaping the First Lady’s arrival with her camcorder and therefore has visual recording of the actual shooter - and thereby evidence that exonerates Dunne. This makes her a target too. Pursuing Dunn is Major General Adam Woodward of the 82nd Airborne Division played by Jon Voight as well as the CIA director played by Paul Sorvino. Dunn finds and rescues Constantini before the assassin can blow her up, and after some work evading police, hole up in an abandoned marine base. Dunn was given a number to call for “extraction” which happens to be a direct line to the CIA director. Agreeing that Dunn is a patsy, the CIA director sends him out to uncover the truth - which may link back to a brutal bio weapon experiment carried out on soldiers in the 82nd Airborne - and thus implicating General Woodward.

Although this film shares many similarities with Shooter (Marine sniper setup as a fall guy for a political assassination) and U.S. Marshals (an African American Marine spec ops fugitive looking to clear his name), it actually predates both of them.

Tropes identified in this movie are: