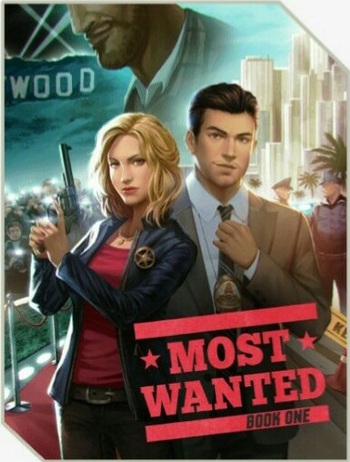 Solve a murder in Hollywood with your partner.
Advertisement:

Most Wanted is a Visual Novel released as part of the Pixelberry Studios (creators of High School Story and Hollywood U Rising Stars) game, Choices: Stories You Play. It was released in August 2016 as one of the app's three debut books, along with The Crown & the Flame and The Freshman. This book is a Spiritual Successor to Cause of Death, and according to the latest post made on that game's Facebook page

, it even shares some of its creators.

In this Detective Drama, the cool and collected Detective Dave Reyes of the LAPD, and the Cowboy Cop from Texas US Marshal Samantha Massey, pursue the notorious and dangerous fugitive and hitman, John Tull.

The series was released in one volume ("Book 1"). For years, a second book was promised, but it was always TBA/TBD. In January 2021, after years of uncertainty, Pixelberry officially announced that Most Wanted was one of several Choices books that was not getting a sequel.